The Gate key,[1] also known as the Eggman Key[2] or secret key, is an object that appears in the Sonic the Hedgehog series. It is a type of key themed after Dr. Eggman.

The Gate key resembles a typical key. It has a gray shaft with rectangular teeth resembles those from a skeleton key on one end. On the other end of its shaft, however, is a white and somewhat rugged guard resembling the wide smile of Dr. Eggman's, complete with sides resembling the doctor's mustache. Lastly, it has two blue rings with red insides on top of its guard that resemble Eggman's classes and an orange centerpiece resembling Eggman's nose.

In gameplay, there are multiple Gate keys hidden around the levels where they can be found. Once they have all been collected, the player is given a form of reward for their efforts.

In gameplay, the goal in the respective stages for Knuckles and Rouge, is to find the three Gate keys hidden in the environment, just like the Emerald Shards. When the player gets close to a Gate key, their Emerald Radar will react to its presence. They player can also consult Hint Boxes in order to receive cryptic clues as to where the Gate keys are hidden.

In Sonic Speed Simulator, the Gate keys are referred to as the Eggman Keys[2] and secret keys. In this game, they can be found in every world of the game. Accordingly, the Eggman Keys were originally in Knuckles' possession, but by freeing Amy from her crystal prison during "Save Amy Event", it created a blast that scattered the Eggman Keys all over the worlds.[3]

In gameplay, the Eggman Keys are objects that spawn at random in random worlds during the "Treasure Hunt Event", where collecting thirty of them will unlock the Knuckles Chao and contribute to the unlocking of Treasure Hunter Knuckles as a playable character. Eggman Keys appear in irregular intervals in a specific world in the game. In addition, they are hidden in well-covered places, like amidst tall plants, behind structures, underneath roads, inside tree crowns, etc. After spawning, the player will have seven minutes to collect as many Eggman Keys as possible before they disappear. When an Eggman Key has been found, the player can touch it in order to collect it. When collected, a gauge will then appear on the left side of the HUD that shows how many Eggman Keys the player has left to collect before unlocking the Knuckles Chao. 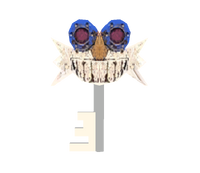