The Gargoyle Djinn, from Sonic and the Secret Rings.

Hearty genies that ambush Sonic with energy waves or by dive-bombing him; they can also turn him to stone, attacking him while he’s petrified.

The Gargoyle Djinn[1] (ガーゴイル・ジン[2], Gāgoiru jin?) is an enemy that appears in Sonic and the Secret Rings. It is a gargoyle-based djinn breed originating from the world of the Arabian Nights and some of the Erazor Djinn's henchmen.

As its name implies, this djinn resembles a gargoyle statue. They have a humanoid form with grey stone-like skin, red eyes, a pair of scaly wings on their back and broad shoulders, but have no lower body and only a ghostly tail. They also have a beak for a mouth, a pair of outward-curving horns on their head, a red gem embedded in their chest, three golden claws for fingers and a similar claw on their wing joints and tail, and grey lines on their bodies. For attire, they have golden bands around their wrists, arms and waist.

The Gargoyle Djinns are seemingly diverse in origin, but they all share the common characteristic of being driven to madness during the events of the game. Supposedly, some were regular inhabitants,[3] others were evil spirits sealed away long ago by King Solomon,[4] and more were created by the Erazor Djinn from the words he carved out of the Arabian Nights.[5][6] Regardless, they were all recruited into Erazor's personal army and used to attack the world of the Arabian Nights in his search for the World Rings.

The Gargoyle Djinns appear exclusively in Levitated Ruin where they disguise themselves as normal statues before springing out to attack Sonic when he gets close to one. In gameplay, the Gargoyle Djinns have a diverse moveset to attack the player with: they can either release a shockwave at Sonic, dive straight at Sonic with a swift slash, or cover themselves with their wings to block Sonic's attacks. They can also immobilize Sonic by turning him to stone with a bright flash (though without damaging the player), allowing them to attack him without retaliation. To regain movements, the player has to shake the Wii remote until Sonic breaks free. The player has to hit the Gargoyle Djinns three times to defeat them, and when defeated, they release Pearls.

Whenever the player has to travel between the floating islands in Levitated Ruin, a Gargoyle Djinn will appear and form an energy trail between the islands. These trails can be used by Sonic as narrow paths across bottomless pits to advance through the level. Such Gargoyle Djinns cannot be destroyed, but they also deal no damage to Sonic and are neutralized when their route ends.

The Gargoyle Djinns are some of the more powerful variations of djinns. They are capable of flight using their wings and are able to fly at super speeds matching those of Sonic the Hedgehog's. They also command more mystical energy-based powers, such as creating repulsion waves and constructing solid energy trails in the wake of their flight. Additionally, their sharp claws are excellent in close combat.

As their signature ability, the Gargoyle Djinns can petrify their foes by unleashing a bright flash. However, this is only superficial; rather than turning their victims fully into stone, they merely encase them in a skin-tight stone layer. As such, their victims can break free if they are strong enough. 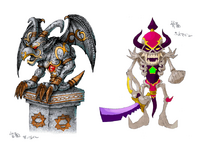