The Gachapandora, from Sonic Mania.

The Gachapandora[note 1][1] is an object that appears in the Sonic the Hedgehog series. It is a combat machine created by Dr. Eggman that deposits miniature drones to attack foes.

The Gachapandora is a large red and yellow vehicle with a sphere-shaped cockpit covered by glass on top. It has two see-through connecting tubes, which each have four capsules, from the back to the front of it. It also has a gray crank in the center, surrounded by two yellow arrows, and a small dispenser underneath. The Gachapandora's capsules have a see through top half from which the drone can be seen and a bottom half, which can either be red or yellow, with an Eggman logo of the oposite color.

The Gachapandora can store eight "prizes" that contain miniature drones. These prizes come in the form of small capsules that can be dispensed by turning the gray crank on the machine clockwise. The Gachapandora is also capable of levitation.

In Sonic Mania, the Gachapandora was used by Dr. Eggman to battle Sonic, Tails and Knuckles (who had been miniaturized before the battle) after they infiltrated the Metallic Madness Zone. However, when Eggman's Gachapandora ran out of "prizes" to use against the heroes, he was forced to let his damaged machine's short-circuiting wires rain energy blasts down on his opponents. When Sonic and co. turned the crank on the Gachapandora however, Eggman ended up getting dispensed from his creation. Eggman subsequently bolted from the battle while his Gachapandora went up in flames.

In Sonic Mania Plus, a seemingly rebuilt Gachapandora was used by Dr. Eggman to battle Sonic, Tails, Knuckles, Mighty and Ray after the heroes had been shrunk inside the Metallic Madness Zone. After the Gachapandora ran out of "prizes" to use against the heroes however, Eggman had no choice but to let his damaged machine's short-circuiting wires rain energy blasts down on his opponents. However, Sonic and co. managed to stay alive long enough to turn the crank on the Gachapandora and deposit Eggman from his machine, which subsequently went up in flames.

Modified Egg Mobile that dispenses capsules when its crank is rotated. All of its "prizes" must be dispensed and destroyed. After which, the player must turn the crank once more to dispense Eggman and end the battle.

After all the capsules have been dispensed, the player must turn the crank once more to destroy the Gachapandora's tubes. This forces Eggman to ascend off-screen. After that, the player has to destroy all of Eggman's "prizes" before he enters his final phase. With the Gachapandora's tube containers now broken, Eggman uses the short-circuiting wires to send down small energy blasts at the player. The player must dodge these and when the Gachapandora comes close enough, they have to turn the crank one last time to dispense Eggman. Powerless, Eggman will run out of the room while the Gachapandora explodes and falls down into a pit, ending the battle. The player can then run to the right to find a shrink ray for growth, followed by the Capsule, and finish the Zone. 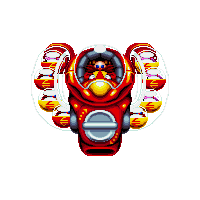