A cannon originating from Guardian Units of Nations

That Turret is so cool! I've never seen vulcanized ceramic used for this sort of thing before!

The GUN turret[1] is a gimmick that appears in Shadow the Hedgehog. They are military turrets used by Guardian Units of Nations.

GUN turrets are stationary weapons akin to the Cell Cannons, able to shoot out red bullets.

In gameplay, the GUN turret can topple any opponent and are useful for taking down the President's escape pod in the Air Fleet. They also appear more frequently than Cell Cannons.

To use a GUN turret in gameplay, the player has to approach it and press

. Once in, they player can use the control stick to aim the shots with the "X" mark on the screen (which indicates where the shots will land) and press

to fire. To leave the GUN turret again, press

again. The GUN turret is not indestructible though, and enemy attacks will deplete its health bar. Once its health bar reaches zero, it will explode and force Shadow to leave it. It will also drop a Heavy Machine Gun, which can be used against enemies.

When mounting on the GUN turret, it has unlimited ammo and no fire-cap applied. Players can tap 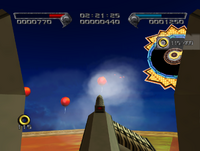 Shadow using a GUN turret in the Shooting Gallery. 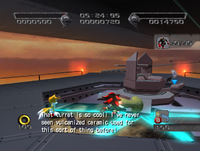