Shadow in the GUN Fortress, from Shadow the Hedgehog.

Shadow... This is the last stronghold of the human army. Destroy the core of the base, and then this planet will be completely defenseless!

GUN Fortress is one of the sixth Stages in Shadow the Hedgehog. It is G.U.N.'s top-secret base and can be reached by completing the Dark mission of either The ARK or Air Fleet.

Built in a series of underground caverns, the GUN Fortress houses the three Mother computers that coordinate those remaining forces resisting the Black Arms invasion with replenishing GUN with dozens of GUN Troopers, Giga Troopers, and Big Foots. In addition, it is armed with surveillance cameras and an immeasurable number of GUN infantry and machines. It is located in a mountain near the sea.

If Shadow has completed The ARK's dark mission and deactivated Space Colony ARK's defenses, the Black Arms take advantage of the opportunity and seize control of the Eclipse Cannon. After Black Doom telepathically broadcasts a speech demanding the surrender of Earth's forces, the Eclipse Cannon is fired at Central City to demonstrate the power that the Black Arms possess. Nothing is left of the United Federation's former capitol but a smoldering crater, though all of its residents have been safely evacuated beforehand.

If Shadow has completed Air Fleet's dark mission, the President barely escapes the would-be political assassin Shadow the Hedgehog. The rather flustered leader is taken to the deepest part of G.U.N.'s subterranean headquarters, where the Commander assures him that their forces will rally. Unfortunately for the humans, over one thousand alien invaders have managed to breach the fort's outer defenses, including Shadow.

Either way, things aren't looking so great for humanity in their struggle against the Black Arms. G.U.N., the only real competent defense force left on the whole of Earth (Eggman included) capable of fending off the Black Arms, has been reduced to barricading what remaining forces it has at its center of command where it can keep resupplying its mechanized forces quickly. Shadow is tasked by Doom's Eye to destroy the three mother computers which churn out G.U.N. robots. Taking an uncharacteristic change of heart, Rouge the Bat is determined to prevent the Black Arms from swiping the last Chaos Emerald that lies at the end of the base. It's your choice whether to aid Doom's Eye or Rouge.

Helping Rouge and allowing GUN time to regroup results in Black Doom confronting Shadow in person over his last minute betrayal, while helping Doom's Eye in crushing the last bits of human resistance leads to where Shadow is confronted by the GUN Commander in person in the incomplete Diablon alongside a furious Sonic, making a heroic last stand to stop Shadow and Black Doom at all costs.

The following weapons can be found in GUN Fortress:

The Secret Door can be found along the main route of the stage, just behind a Big Foot. Inside, there is a G.U.N. vehicle and a shortcut through the Stage with many Rings and 1-Ups. This shortcut also bypasses a difficult area before rejoining the main path that leads to the final mother computer and the Goal Ring.

There are GUN turrets in all three mother computer rooms that are to be used to destroy the cores. If there are no enemies nearby, Shadow will automatically target the cores himself. By destroying all of the GUN Soldiers and mechs, the player will receive about 40,000 points in total, which is more than enough for an A-Rank. This makes it one of the few Dark missions where a time bonus isn't need to get an A-Rank.

Shadow will be shot if the player stands still while the surveillance cameras are watching. 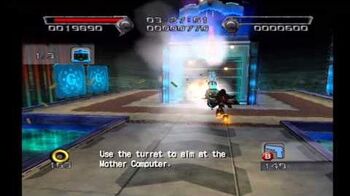 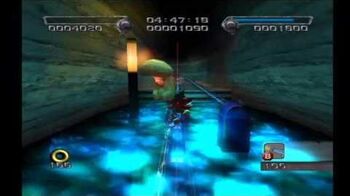 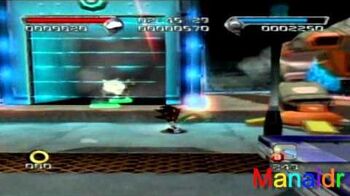