Geek N Freak Toyz (abbreviated as GNF Toyz) is a South Korean manufacturer of licensed collectible products, formed in 2013. In 2015, GNF revealed they would be producing Sonic the Hedgehog toys.[1]

In 2017, GNF started producing figures for their Sonic the Hedgehog Boom8 series. The line-up consisted of main characters from the series, with the figures being about 8cm tall. Most of the initial characters were based on the Classic style, reminiscent of First 4 Figures' early Sonic figures, but some characters in the "Modern" style were soon revealed to be in the works. 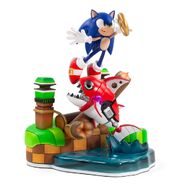 Sonic the Hedgehog VS Chopper
Add a photo to this gallery

In 2017, GNF announced a partnership with First 4 Figures to distribute their figures internationally.[3] F4F has since distributed the Boom8 figures in combo packs of two, as well as the diorama.[4]