"Fu-tu-re" (ミ•ラ•イ, Mi-ra-i?) is one of the ending theme songs for the Japanese version of Sonic X. It was used for episodes 1-13. During the show's original run, it was used from April 6, 2003 to June 29, 2003. An instrumental version of the song is played in the ending credits of the French dub of Sonic X.

Sonic's friends are asleep on the sofa while Sonic is staying up and watching clips of the episode that had just played at the time (any clips from episodes 1-13). After watching it, it is morning on the following day and Ella puts him on the sofa and shows him one of the most important rules on a wall. It is written in Japanese and stating that it is recommended to watch TV with the lights on and at a safe distance (in the French version, it is left blank). Sonic sheepishly shrugs in response. 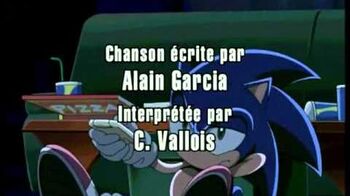