Not to be confused with Ice Factory or Frozen Forest.

Skate along the icy paths of Frozen Factory at lightning speed as the mechanical arctic islands turn into a casino filled extravaganza.

Frozen Factory (フローズンファクトリー, Furōzunfakutorī?) is the fourth world in the Wii U version, PC version and Nintendo 3DS version of Sonic Lost World. Frozen Factory takes place in a floating factory around an ice-themed area, which is seen to have snowboarding sections, rotating gears and crushers inside it. Like other worlds in the game, there are also other separated zones with their own features, such as a casino-themed zone.

In the Nintendo 3DS version of Sonic Lost World, the player can find White Material in the Zones if they finish them successfully.

This Zone features the tube styled gameplay of other zones and is filled with lots of rotating machinery, as well as allowing Sonic to ice-skate throughout the level and do pirouettes when jumping on ice. This zone also brings back the tubes to transport Sonic through the stage, similar to Chemical Plant Zone's.

First seen in the Gamescom demo, Zone 2 (which takes place at night) has a unique gimmick to the player: starting the Zone by Spin Dashing, Sonic turns himself into large snowball and the player has to control him along a dangerous route with bottomless pits. The player can gain more speed and momentum by Spin Dashing again as a snowball, and the player is able to collect items and objects, but they will not function until Sonic touches a Star Post. This makes the player entirely exposed to numerous amounts of Badniks, as Crabmeats are able to shoot missiles at Sonic in an attempt to destroy the snowball. Small groups of Bombs and Cluckoids try to blow Sonic into the bottomless pit. Getting the snowball destroyed is an instant death.[2]

Zone 3 is a casino-themed zone in contrast to the other zones. Enemies such as Egg Pawns, Crawls and Nebula Badniks appear. This Zone is very similar to previous casino-themed areas, such as Casino Night Zone from Sonic the Hedgehog 2, Carnival Night Zone from Sonic the Hedgehog 3 and Casino Park from Sonic Heroes. There are also numerous different gimmicks in this Zone, which are either dangerous or useful to the player. There are numerous neon lasers, falling purple dice and rotating slot machines rollers, which the player has to look out for in this Zone.

Zone 4 has a mixture of 2D and 3D sections filled with ice to skate on, and an industrial area reminiscent of Metropolis Zone from Sonic the Hedgehog 2, complete with bolts to run on. Zeena awaits the player at the end of the Zone for a boss battle.

Zone 1 is visually similar to its Wii U/PC counterpart. Snowboards make their return in this level, being utilized at the beginning and end of it, while the rest of it is traversed on foot. It is also in this Zone where Sonic can unlock the Ivory Wisp and activate the Ivory Lightning Color Power ability. A few puzzles involve Sonic rolling snowballs to block snowblowers that spew out cold air, while the other on-foot segments involve running through moving gear parts, which will instantly kill Sonic if they roll into him, and defeating giant Crawltons.[4]

Unlike Zone 1, Zone 2 is played completely from a 2.5D perspective, and takes place in a snowy area outside of the factory. There are plenty of icy platforms to traverse, rails to grind, and Snowblowers that will freeze Sonic solid. Unlike the Wii U/PC version, Sonic will not skate or do pirouettes on the ice, but ice physics still apply. After it is unlocked two Worlds later, the Cyan Wisp becomes available for use in this stage.

Zone 3 is visually similar to Zone 1, but has a much more open design and can potentially be one of the longest levels in the game if the player is not aware of what they are doing. This Zone is broken into multiple sections where the player must push snowballs around and put them into holes to open capsules containing items and springs to advance the player through the Zone. A snowball will not fit into a hole unless it has reached an appropriate size by rolling it around on the snow and ice. After the first area, a snowman head resembling the one on Zeena's snowman mech will appear and start stalking Sonic throughout the level, freezing him upon contact, and will destroy any snowball it bumps into. The only thing Sonic can do to it is stun it by hitting it with a Somersault and then a Focused Homing Attack. Once it is unlocked in the next World, the Gray Quake becomes available to use in this level, and is required to nab some of the Red Star Rings.

Unlocked by nabbing every Red Star Ring from the three main Zones. This level takes place exclusively during the snowboard sections of Zone 1, but this time they are navigated with the Indigo Asteroid, which is used to destroy the many trees, spiked balls, and other obstacles that clog the player's path. 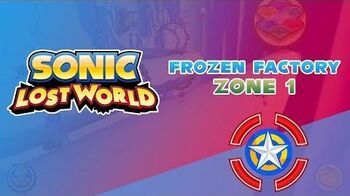 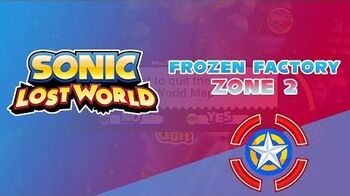 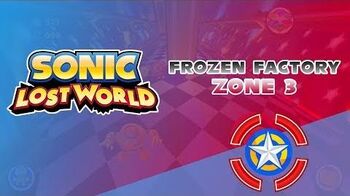 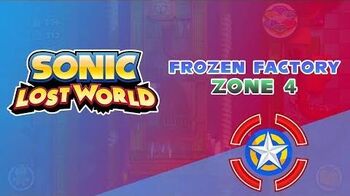 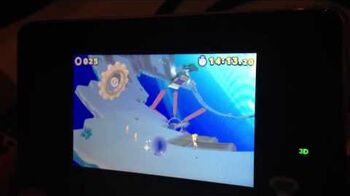