Frosties, known as Frosted Flakes in United States, is a breakfast cereal produced by Kellogg's. In 1994, the cereal was bundled with a free Sonic the Hedgehog-themed yo-yo and a chance to win free Sega prizes, like a Sega CD or a Sonic LCD wrist game, along with a television commercial with an animated Sonic.

The commercial begins with a television showing Sonic playing in Hydrocity Zone for Sonic the Hedgehog 3 on the Sega Genesis. Tony the Tiger appears with a Sonic Spinner and does some tricks with it as Sonic stares.

The are four different spinners, three based on the Sonic the Hedgehog series and one based on Tony the Tiger. Each face has a different image. They all contain an internal light powered by a battery.

Flyer
Add a photo to this gallery 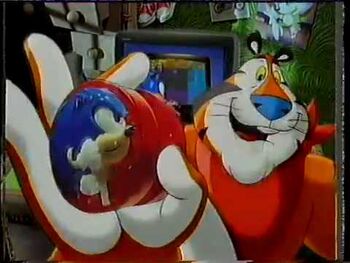 Sonic the Hedgehog in other media
Retrieved from "https://sonic.fandom.com/wiki/Frosties?oldid=2361868"
Community content is available under CC-BY-SA unless otherwise noted.