Frontier Canyon Zone is the fourth Zone in Sonic Rivals 2. A rare instance of a Wild-West-themed area within the Sonic the Hedgehog series, the Zone contains three Acts plus a boss fight at the end.

Crammed full of wooden saloons, railroad tracks, lassos and tumbleweed, Frontier Canyon uses just about every Western cliché in the book. While Act 1 is mostly conducted outside amidst the sun-bleached rocks, Act 3 delves into the Gusty Gulch Gem Mine below the surface.

The duo volunteer to collect Rings for Knuckles and Rouge to fuel their Emerald detector. They were however ambushed by Espio and Silver who needed the Rings for their own purposes.

Shadow decides to talk with Rouge to find out how many Chaos Emeralds she and Knuckles have and warn them the risk of Eggman Nega's plans of unleashing the powerful being known as the Ifrit into their world, only for Rouge to provoke Shadow into a fight. Meanwhile Metal Sonic intercepts Knuckles while collecting Rings.

After asking Sonic and Tails to collect Rings to fuel their Emerald detector Rouge has a chat with Shadow (see above for what Shadow and Rouge did when they met) while Knuckles collects Rings to fuel the Emerald only to discover that Metal Sonic is also collecting Rings for his needs.

Tired from using his ESP too much, Silver desperately needs Rings to power himself back up while Espio assists. The two decided to ambush Tails and Sonic as they started collecting Rings. 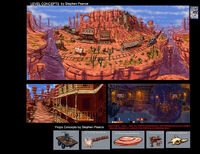