Monsters born of Dark Gaia with exceptionally high intelligence can take on a humanoid appearance like these fiends. Left alone long enough, these dark conjurers will summon forth an endless supply of Frights. Cut them off at the scource!

The Fright Master (スプーキーマスター, Supūkī Masutā?, lit. "Spooky Master") is an enemy that appears in the nighttime Stages in Sonic Unleashed. They are a variant of Dark Gaia's Minions that resemble wizard-like phantoms. Their signature ability is to perform spells that summon Dark Frights to the battlefield.

The Fright Masters' basic appearance is that of a humanoid phantom-like wizard. They are dressed in cyan clothes with black shadows have a pointy hat and cape, and are decorated with lavender symbols. The only parts on their body that are shown are their lavender eyes and some of their dark faces. They are also always carrying a red staff with a head that resembles a Red Fright.

The Fright Masters and the rest of Dark Gaia's Minions came into being when Dark Gaia broke apart at the beginning of Sonic Unleashed due to its premature awakening by Dr. Eggman. These fragments were then spread across the earth and became Dark Gaia's Minions, with the Fright Masters amongst them. Due to being born with high intelligence, they are able to take on a near-perfect humanoid appearance.[1] They first appear in Rooftop Run Night Act III: The Great Aqueduct in the Wii/PlayStation 2 version and Dragon Road Night Act 1 in the Xbox 360/PlayStation 3 version.

Upon the reconstruction of Dark Gaia by Dr. Eggman, all of the Fright Masters (along with the other types of Dark Gaia's minions) were returned to the beast, who was later defeated and sealed within the planet's core.

The Fright Masters are able to move into an area by emerging from black puddles on the ground. As a Dark Gaia minion, the Fright Masters can possess people by latching onto the deepest, darkest part of the heart, and generate despair, negative emotions or even erratic behavior that are completely opposite to the person's personality. 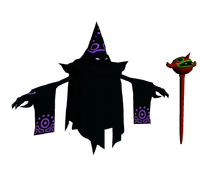