Sonic News Network
Register
Don't have an account?
Sign In
Advertisement
in: Articles in need of expanding, Eggman's creations, Robots,
and 2 more

The Frigate Skullian, from the Wii version of Sonic Colors.

The Frigate Skullian[1][2] (スカルン[3][4], Sukarun?, lit. "Skullun"), also known simply as the Skullian,[1][5][6] is the boss of Asteroid Coaster in Sonic Colors. It is similar to the Frigate Orcan from Starlight Carnival, but is more heavily upgraded. This boss differs from its predecessor by having a red and black color scheme, and several new abilities.

An upgraded version of the Frigate Orcan.

The Frigate Skullian is the Frigate Orcan from Starlight Carnival, but upgraded. This boss differs from its previous encounter in Starlight Carnival by being considerably larger than the Frigate Orcan, having four dual-barreled machine guns, two in back and two in front, and the ability of teleportation, which it uses to disappear, reappear, and send asteroids out of the rifts. After taking a few blows, the warship covering reveals twelve robots powering the vessel, along with the face of the ship, which is a creature with eye-stalks, similar to a snail, in contrast to its previous menacing skull appearance. While damaged, the machine will start smoking and the eyes on its back will glow red. After taking that final attack, it sets on fire and drops a cargo of boxes filled with rings. During the battle, the ship will occasionally drop a Wisp Capsule containing the Orange Rocket Wisp, which can be used for double damage during the side-scrolling sections, and is crucial for earning an S-Rank.

In Sonic Colors: Ultimate, earning an S-Rank during this fight will unlock the achievement, "Smash N' Grab".

Unlike the Wii version, the Frigate Skullian is smaller due to it lugging around cargo boxes. The Frigate Skullian also has a Meteorite Hammer that charges up before slamming down, also aiming in the process. This makes it hard to dodge the attack. After it slams down, use the White Boost to charge it and get a Violet Wisp. This attack will continue three times and on the third time, it will accidentally damage one of its boxes, making it drop to the ground and release rings. After a series of attacks, it will start to use laser attacks; Sonic can avoid the lasers by either grabbing onto the hand rail or ducking via a Spin attack. Slam into the power core(Yellow) to damage it. Continue doing this and the Frigate Skullian will explode. An optional way of defeating it is to use the Violet Void Wisp Power, which turns Sonic into a black hole and sucks in nearby objects. Get close to the Frigate Skullian and watch as it is damaged slowly. As the Void grows, it will eventually become big enough for the Frigate Skullian to be sucked in, destroying it instantly. 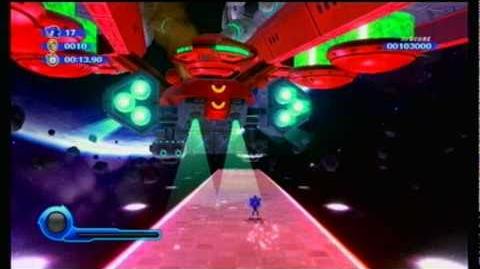 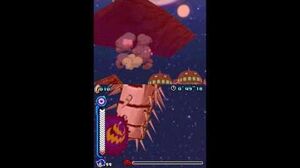 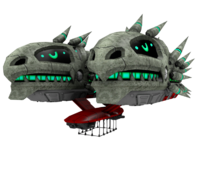