Sonic News Network
Register
Don't have an account?
Sign In
Advertisement
in: Articles in need of expanding, Eggman's creations, Robots,
and 2 more

The Frigate Orcan, from the Wii version of Sonic Colors.

In the meantime, enjoy the park. I'll leave you your own private tour guide!

The Frigate Orcan[1][2] (クジラン[3][4], Kujiran?), also known as simply the Orcan,[1][5][6] is a character that appears in the Sonic the Hedgehog series. It was a whale-based robotic ship created by Dr. Eggman. During the Wisp incident, it would guard one of Eggman's tractor beam generators, only to be destroyed by Sonic the Hedgehog.

The Frigate Orcan is a flying war machine with two whale-shaped coverings on its top.

The Frigate Orcan's main weapon is a machine gun that can fire rapid bullets of energy. In the Nintendo DS version of Sonic Colors, the Frigate Orcan also has an arsenal of missiles, iron balls, and lasers.

A twin-orca-shaped warship. To defeat, the player must land sixty blows on it.

Obtaining an S-Rank in this battle depends on how many times the Cyan Laser is used along with the total ring count. In Sonic Colors: Ultimate, beating Frigate Orcan with an S-rank will unlock the achievement, "Crashing The Party Barge".

The Frigate Orcan, from the Nintendo DS version of Sonic Colors. 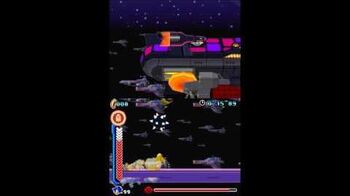