You may be looking for the Transformation Gate in Sonic and All-Stars Racing Transformed.

Team Rose in front of all three types of Formation Change Gates.

A gate with an energy field in the colors of either red, blue or yellow.

The Formation Change Gate[1] (フォーメーションチェンジゲート[2], Fōmēshonchenjigēto?) is a gimmick that appears in Sonic Heroes. When a team passes though a formation change gate, it automatically causes the team to change into either Speed formation, Power formation or Flight formation, depending on the gate's type.

The Formation Change Gates appear to be floating photosensors that gives off three sets of beams of light. These lights are in three different colors, each corresponding to the character type in the game: red for the Power Type, yellow for the Fly Type and blue for the Speed Type. 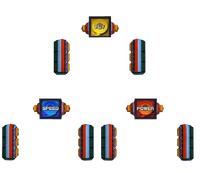