The Forest was originally the site of the previous castle of the royal family of Soleanna, until the accident during the Solaris Project ruined the whole castle, leaving the Forest and the ruins as just a place for sightseeing. In Sonic's story, Sonic the Hedgehog first came to the Forest after defeating the Egg Genesis where he escape into Tropical Resort with Elise. However, he later returned to reach Kingdom Valley, after completing the three trials given by the priests. 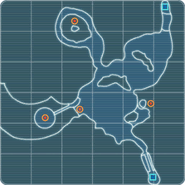