Focused is a positive status effect and a battle mechanic that appears in Sonic Chronicles: The Dark Brotherhood.

In gameplay, when a target is affected by Focused, his/hers Attack is increased, making the target more likely to hit opponents. A few rounds after the target has been given Focused, however, it will wear off. Targets with the Focused status are signified by having a white "lock-on" marker on them. 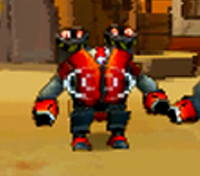