"Fly Spy" is the eleventh episode of the anime series, Sonic X. It first aired on 15 June 2003 and 15 November 2003 in Japan and the United States respectively.

The episode starts out at a high security area one night where Rouge is scouting a high security area with her Treasure Scope. Curious as ever, she decides to pay a visit to the facility. Deep within the facility, she visits a vault, turning her attention towards a large, precious, shiny diamond on display inside a glass case. The guards are watching this from surveillance cameras and decide to sound the alarm. This did not stop Rouge for as she breaks the glass and grabs the emerald while the guards activate their lockdown procedures to shut all of the doors in the facility in attempt to stop Rouge. The moment the guards enter in the vault, she has disappeared and the only thing they see is a "Thank you" card. Looking up, the guards see that the roof of the facility has been lifted which allowed Rouge to escape. Rouge makes a remark about how her jewel is not one of the Chaos Emeralds but still remained of possible use as she flies away.

The next day, Scarlet Garcia is reporting on the news about last night's incident about how it is the most significant of the mysterious jewel thefts all across Station Square that have authorities baffled. Cream is watching this in the Thorndyke Mansion's garage when Amy bursts in with a plate of pizza, wondering where Sonic is. Cream responds that Sonic went out with Tails and Chris for something. Out above in Station Square, Tails, Chris and Sonic are flying on the X Tornado in order to look for a Chaos Emerald. The X Tornado takes a sudden turn, nearly resulting in Sonic falling off the X Tornado as he barely hangs on. Meanwhile, at the White House, the President declares that they must launch an attack at Dr. Eggman. His chairman though, debates that it would not be simple because after extracting the remnants of one of Dr. Eggman's robots for research, the authorities have concluded that Eggman's technical and military arsenal surpasses that of the military's. The Director of Central Intelligence suggests enlisting the aid of Sonic. The President is uncertain if they could communicate with a hedgehog, but the director assures that Sonic can understand the human language, leaving the President to agree with enlisting Sonic.

At Chris' school, Chris is painting a picture of the red Chaos Emerald when Frances and Danny took notice of it. Mr. Stewart then tells Chris that a red emerald was recently spotted at an old abandoned factory at Silky Heights. Rouge, however, manages to overhear this and makes it her mission to check it out. After the school day, Chris brings Danny to his mansion, where Danny meets Tails and Amy for the first time and the group proceed to fly on the X Tornado to search for the Chaos Emerald. With Sonic leading on, they rush towards the area of the warehouse after following a red sign pointing in its supposed direction. However, the sign easily falls off and is revealed to have been turned the wrong way by Rouge. She then sets out to find the Chaos Emerald herself. Upon reaching the factory she takes note of a shiny object and suddenly, bright lights flicker and the G.U.N. soldiers point their guns towards Rouge. A female agent, Topaz proceeds to handcuff Rouge and the bat mocks Topaz, resulting in her fellow soldiers bursting in laughter. Topaz's commanding officer reveals that the military has set up a trap to catch Sonic. Realizing the plan did not go their way, they decide to make the best of the situation and bring Rouge to see the President. Meanwhile, in the sunset, Sonic and his friends still continue to search for the factory.

Topaz and Rouge are seen in the President's office afterwards. Rouge asked Topaz to get a cup of coffee but Topaz did not want to at first until the commanding officer commands Topaz to do so. After that commotion, the President walks in along with the Director of Central Intelligence and Jerome Wise. After being identified as the one who made all those mysterious jewel thefts, she is offered a position in G.U.N. as a special agent, specifically needed for the break-in on Eggman's base. After Jerome Wise makes it clear that she would not be penalized for stealing the gems (even going as far to say that she can keep them if she remains quiet), Rouge agrees, only under the premise that she would eventually have a chance to get closer to her beloved Chaos Emeralds. Meanwhile, Sonic returns back to the sign and rushes towards the other direction with the X Tornado following him.

That very night they proceed to perform their mission, arriving at the location with a plane. During the flight, Topaz straps a bomb to Rouge's wrist as a measure that she will remain loyal to the G.U.N. army's cause, otherwise, a button will be pressed and she will be killed. Rouge mocked Topaz on this. At the moment, the plane has arrived at its drop point and the agents all jump off and land at an island which is the location of Dr. Eggman's fortress. Meanwhile, Sonic and his friends have finally arrived at the warehouse, though they cannot do anything and Chris and Danny have fallen asleep. The military forces wondered how they could enter the base when Rouge managed to point it out. With that problem resolved, the agents started wondering around the building to look for the output sector of the base. However, Rouge asks to go off by herself to investigate. Not trusting her, Topaz volunteers to accompany her while the other agents retreated.

They discover a machine containing a Chaos Emerald inside its glass case. While Rouge is being drawn to the emerald, Topaz suspects they are being watched and suddenly, Topaz gets captured in a robot claw from E-70 Noizi while Rouge manages to avoid the initial assault. Rouge tries to use her "Screw Kick" in attempt to rescue Topaz but Noizi activates its speakers to release a very loud alarm. Rouge and Topaz suffer earaches and the noise in turn awakens Dr. Eggman and alerts him of the intruders. The volume of the alarm further increases which further annoys Rouge, Topaz and Eggman. The doctor sends out E-12 Behemoth, E-13 Guardbot and E-14 Sneezer to intercept Topaz and Rouge and attacked them. Rouge evades their attacks and their attacks revealed the generator room. Rouge tries to attack Noizi again but Noizi activates its loud volume alarm again, leaving Rouge to scream in pain. Guardbot accidentally shoots down Sneezer who then destroys Behemoth and the glass case containing the Chaos Emerald.

Noizi takes its chance to subdue Rouge once again. Eventually Rouge hatches an idea and breaks the bomb off of her wrist then tosses it into the nozzle on Noizi's head. The robot's sound now cut off, Rouge tells Topaz to press the button that activated the bomb. She does so and the robot's connection to its speakers is destroyed by its explosion. Eggman rushes towards the scene while Rouge then delivers a devastating finishing blow through the robot and it is destroyed. The explosion happens to be so huge that she has to carry Topaz out of the room and fly her to the safety on the outside. Unfortunately for Eggman, he arrived at the exact moment of Noizi's explosion and got caught in the blast.

With their mission completed, the G.U.N. personnel went home. The next day at school, Chris and Danny are caught sleeping in class by Mr. Stewart who reminds them to get to bed on time. 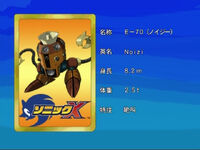