"Flood Fight" is the thirty-second episode of anime series, Sonic X, as well as the sixth and final episode of Chaos Saga. It first aired on 9 November 2003 and 23 October 2004 in Japan and the United States respectively.

The episode starts with Frances, Danny, and Helen playing basketball while Mr. Stewart informs the government that Chris is missing. Chris is waiting for Sonic and Tails in Tails' workshop, but the heroic duo doesn't show up as he still intends to look for Knuckles and give him the white Chaos Emerald. However, Sonic and Tails encounter Knuckles in Mystic Ruins standing beside Dr. Eggman, who is lying unconsciously on the ground. Sonic questions Knuckles how Eggman came into this state with Knuckles responding that he had found Eggman this way. Tails grabs a stick and starts poking Eggman until he surprisingly wakes up. Sonic asks what happened to Eggman, with the doctor responding that Chaos double-crossed him and he wants to utilize the power of the Chaos Emeralds for his own ambitions. Knuckles begins to threaten the doctor when Sonic tells Knuckles to calm down. Eggman snapped at Knuckles' actions before being escorted away by Decoe and Bocoe on a balloon.

Knuckles proceeds to tell Sonic and Tails that if Chaos gets a hold of the last Emerald, he will become too powerful. Suddenly, a red orb transports Sonic and Knuckles back into the past of Angel Island, where they witnessed Tikal trying to stop Pachacamac from invading the Master Emerald's shrine. Despite this, Pachacamac orders his clan to strike. They ran over the defenseless Tikal and some Chao down to the ground. Chaos, witnessing all of what has been happening by Pachacamac and his clan, appears as they confusedly encounter him. Then, Chaos absorbs the power of the Emeralds' to destroy Pachacamac and his clan, which is their punishment for violating the Altar and harming the Chao he's sworn to protect. After that, the Master Emerald seals Chaos inside itself, instantly. Sonic and Knuckles rushed to Tikal's aid with her being sad of her father not listening to her. The three of them walked together to the top of the Master Emerald's shrine with Tikal saying a prayer. Sonic and Knuckles eventually are transported to the present with Tails.

Chris calls out to the heroes, running to them while holding out the seventh Chaos Emerald. Knuckles hesitates, making Chris slow down. Suddenly, a burst of water appears and forms into a whirlpool, sucking Chris in. Sonic jumps in to save Chris while Knuckles punches the vortex, splitting it into halves. Despite this, the Chaos Emeralds are dropped and a hole in the ground opens up with the wave of water appearing from it and the Chaos Emeralds successfully fall into the water before disappearing. Believing that the water was Chaos, Knuckles begins to lose hope. Now that all seven Chaos Emeralds are in Chaos' possession, Chaos would be too powerful to defeat. Sonic, with a determined look in his face, says that they'll need to try defeating it somehow. Not far behind, a colony of Chao appears.

In the relatively peaceful Station Square, the civilians are enjoying their daily activities when suddenly they hear a rumble underground. While Sam Speed warns an over-speeding driver, columns of water suddenly rocket upwards from all of the drain sewers like geysers while more water emerges from buildings and roads, creating fissure cracks. While Sam escorts civilians to a nearby safe building, a tsunami forms, washing Sam away. One trail of water forms a face, the powerful deity of Perfect Chaos. Chuck, Ella, Cream and Cheese proceed to evacuate to some mountains as Mister Tanaka remains behind to wait for Chris, being a skilled swimmer so that he can handle the flood waters when they come, while Sonic, Tails, Knuckles, and Chris take off to the flooded and ruined Station Square. Witnessing the events from the White House with Topaz and Rouge, the President authorizes G.U.N. to take down Perfect Chaos. The government attempts to shoot down Chaos with choppers, but their weapons prove no match against the water monster's watery skin. Perfect Chaos launches the missiles back at their sources, destroying the choppers, but the pilots survive. Meanwhile, Eggman, Decoe, and Bocoe launch the Egg Carrier 2 in hopes of defeating Perfect Chaos as revenge for betraying Eggman. Sonic attempts to take down Perfect Chaos but serves no match to it. Perfect Chaos creates another tidal wave to drown Sonic, only for the blue hedgehog to survive by surfing on a wooden plank. Chris rescues him back on the X-Tornado. Chaos then tries to shoot down the X-Tornado using spears of water, but the X-Tornado dodges them and flies past Chaos. Looking upwards, Sonic notices the Egg Carrier 2, as Eggman is attempting to defeat Chaos with it, but it gets shot down with a single powerful laser from the deity.

Suddenly, a bright light blinds Chaos and the X-Tornado's passengers as the X-Tornado lands on a piece of highway by the light. The light reveals itself as Tikal who has arrived from the past who also wishes to stop the water monstrosity. Sonic suspects that Eggman initially somehow figured a way to revive Chaos so he can use it to take over the world. Perfect Chaos then spits out the Chaos Emeralds, now drained of their power. Tikal states that Perfect Chaos is only full of hatred and sadness and suggests sealing him back in the Master Emerald before it is too late, but Sonic replies that it will not work, explaining that if they do that, the same thing will only happen again and they have to solve the problem once and for all. Tails, Amy, Cream, Knuckles, Chris, Big, and Eggman find the Chaos Emeralds and meet up with Sonic. The crowd cheers the blue hedgehog on; suddenly, the Chaos Emeralds started to glow and rise up. Their powers transform Sonic into Super Sonic, much to the surprise of Tikal, who thought that the Emeralds could only be awakened by hate and anger. Tails and Knuckles reply that there are other more powerful feelings such as caring and friendship.

With his new powers, Super Sonic proceeds to fight with Perfect Chaos. Underestimating Super Sonic, Perfect Chaos tries to defend itself with its shield, but Super Sonic shatters it. Perfect Chaos then tries using its water tentacles, but they shatter against Super Sonic in his Super Spin Attack like ice. Growing desperate, Perfect Chaos tries its laser breath, but when Super Sonic easily dodges it, Perfect Chaos turns it on Chris and the others. Super Sonic arrives to the scene and blocks the laser from harming his friends, which only provokes him into redoubling his attacks. With one final punch with stopping the laser and charging into Perfect Chaos by plunging right down its throat, making it swallow its own attack, Super Sonic defeats the water monstrosity for good, but Chaos 0 emerges from a water puddle; he is not defeated entirely yet and is still alive. A Chao colony arrives, much in the favor of Chaos, and Tikal tells Chaos the truth that the Chao are living in Earth at peace before they both disappear together. While the heroes are happy with the resolution, they realized that Dr. Eggman has left the scene. 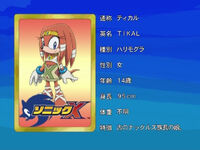 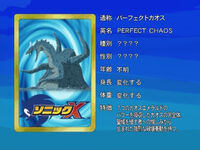 Perfect Chaos
Add a photo to this gallery 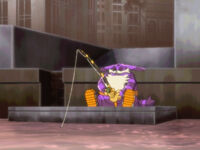 A scene showing Big fishing by the flood at the end of the episode has been cut from the English dub. 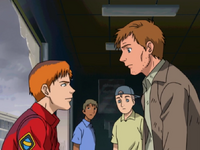 Sam questioning Jerome
Add a photo to this gallery