Flicky (フリッキー, Furikkī?) is an arcade game developed by Sega and released by Bally Midway in 1984, using Sega's System 1 hardware. After the official arcade release, it has been ported to numerous platforms, including the SG-1000, MSX and Sega Mega Drive. It is known to be the first appearance of Flicky, who went on to be one of Sonic's original animal friends and a recurring character in the Sonic the Hedgehog series.

The player controls Flicky around a series of simplistic levels. Flicky moves left or right and has one action button to jump and shoot, with quite a good jump range but it cannot actually fly.

The aim of the game is to collect chicks called Piopio (Chirp in the Mega Drive version) who are scattered around each level, and return them to the doorway that Flicky used to enter each level. To get a Piopio to follow Flicky in a line like ducklings, the player needs to touch them, usually this involves jumping to reach them. If the player has more than one Piopio and place them in the doorway, their score per Piopio will increase by 100 (i.e. 100 points for the first Piopio, 200 for the second, 300 for the third...). If the player places the Piopio separately player will get a flat rate of 100 points.

The player's main obstacle is the Nyannyan (Tiger in the Mega Drive version), tabby cats that are similar to the cats in the Mappy franchise. If the player hits a Nyannyan it will cause them to lose a life. If a Nyannyan touches the player's Piopio line, the clipped Piopio will scatter and the player will have to re-collect it and any behind it in the line. Choro (Iggy in the Mega Drive version) is an Iguana that does the same thing. Each level has a set of objects, ranging from telephones to chairs to flowerpots that the player can grab by touching them and can throw it upon jumping, with this being because throw the same button as jump. Thrown objects can hit Nyannyan or Choro and net the player extra points. Hit more than one with the same object and a gem will appear and give player even more points.

Each level loops, thus making the game endless. Between every few rounds is a bonus round, where Nyannyan catapults Piopio up in the air, and Flicky must catch them in the net.

The game was ported to two of Sega's home consoles, the SG-1000 in 1984 and Mega Drive, in 1991. Both lack the animated title screen of the arcade original and suffer from downsized graphics due to the consoles' limitations. In Japan, the Mega Drive version was released via the Sega Meganet subscription service, which, in conjunction with the Sega Mega Modem peripheral, allowed users to download games to the Sega Game Toshokan cartridge. This version was also included in the Game no Kanzume Otokuyou compilation, released in Japan through the Sega Channel subscription service. Flicky was ported to Sega Mega-CD in 1994 as part of the Game no Kanzume Vol. 1 compilation; this version is identical to the Sega Meganet release, but features an enhanced CD-quality soundtrack. In 1997, Flicky was ported to the Sega Saturn as a part of SEGA AGES / Memorial Selection VOL. 1.[1]

Due to her close links with the Sonic franchise, the Mega Drive port of Flicky was included as an unlockable game in the Sonic Mega Collection and Sonic Mega Collection Plus compilations that were compiled under Sonic Team's supervision. The game was included in Sega Smash Pack 2 compilation for the PC. Flicky is also one of the many classic games that was ported onto the Sonic Cafe service. Flicky was also playable in web browsers through its release on the PlaySEGA service.

Connection to Sonic the Hedgehog series

Flicky was one of the animal friends released from destroyed Badniks and capsules in the first Sonic the Hedgehog game, and has appeared in numerous Sonic games since then.

Flickies as a species have been explained further in Sonic 3D Blast, where they were able to travel between dimensions by using giant rings. The gameplay mechanic in Sonic 3D Blast is similar to the Flicky game, involving collecting birds and delivering them to an exit, receiving extra points for delivering multiple birds at once. 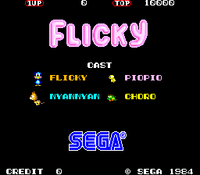 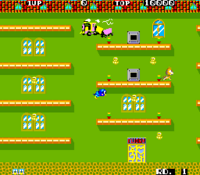 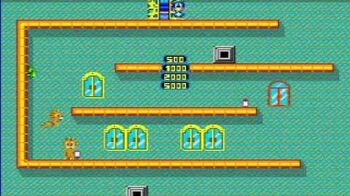