For other uses, see Flasher (disambiguation).

Sonic the Hedgehog 2 (16-bit) (only appearance)

It protects itself with a powerful flash of light

The Flasher[1] (フラッシャー[2], Furasshā?) is an enemy in the Sonic the Hedgehog series. It is a mass-produced, firefly-based Badnik model created by Dr. Eggman.

Flashers are rather small Badniks comparing to other models. Based off of fireflies, they have a small red head with two grey antennae and two eyes with black dots for pupils. The upper part of their body is black, while their underside is flat with an electric bulb covering it.

The Flashers originally appeared in the 16-bit version of Sonic the Hedgehog 2 as enemies, where they can be found in Mystic Cave Zone.

In gameplay, the Flashers float around. Most of the time they are found in corners, narrow routes and can even fly through walls. Unlike enemies like Whisps, they do not usually move around in groups. Their flying pattern is also rather erratic. When a Flasher stops in one place after floating for three seconds, it creates a flashing barrier from its bulb that makes it impossible to hit it and cause damage to the player if they touch it. Even when the player has obtained Invincible or has gained invulnerability from taking damage, the Flasher stays invulnerable until it lowers its shield, upon where it can be taken out with a Spin Jump. With this ability, Flasher can block narrow routes. Also, upon their destruction, they release an Animal.

The Flashers are capable of flight. They also possess the ability to generate a completely impenetrable electrical force-field around themselves that can block any attack and as well electrocute those that make contact with it.

The Flasher mk.II is a variant of the Flashers from Classic Sonic's world. These Badniks possess the Flasher's body, but possess also legs that allow them to climb along surfaces, releasing electrical waves as they go. They first appear in Sonic Mania.

In the Sonic the Comic comic series and its spin-offs published by Fleetway Editions, Flashers appear as part of Robotnik's Badnik army. Usually flying on swarms, Flashers were first seen attacking Sonic and Tails in Mystic Cave Zone, who had come to rescue Amy from Captain Plunder.

In the Sonic the Hedgehog comic series and its spin-offs published by IDW Publishing, Flashers form a part of Dr. Eggman's Badnik army. Their past is virtually identical to their game counterparts', up until after the events of Sonic Forces. 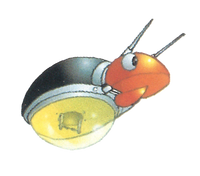 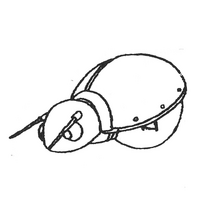