The Fish-One is an enemy that appears in Sonic and the Black Knight. They are a type of the Knights of the Underworld and a part of the Fish-One variant which are tasked with scouting and monitoring enemies. Their speciality is shooting freezing energy spheres.

According to developers notes, the Fish-Ones were designed to look like sea creatures.[1]

The Fish-Ones, as their name implies, resemble large normal fish. Most of their skin is colored blue while their underbellies are in a shade of light blue. They also have wing-like pelvic fins, a pointy dorsal fin and a glowing red orb instead of a tail fin. Additionally, they have glowing baby blue medieval markings running across their body. On their head sections, they carry a metal visor with a single eye behind them.

The blue Fish-Ones are a rare type of the Fish-Ones and can only be encountered in a few Missions in Shrouded Forest. Like most other Knights of the Underworld, the Fish-Ones can be defeated with a single, well-aimed sword slash.

The Fish-Ones' only way of attacking is flying stationary in one place and firing their energy bombs at the player, freezing the playable character on the spot and make him/her unable to move (if hit in midair, the playable character will fall down to the ground). Blocking the energy bombs with Guard will negate their effect however. Also, equipable items such as the Ice Broach, Fiery Quaff and Hot Fiery Quaff give a certain degree of resistance to the energy bombs.

The Fish-Ones are able to teleport to different locations by emerging from black voids. They are also capable of flight through midair by using their flippers.

The Fish-Ones' signature ability is shooting specialized blue energy spheres from their only eye which freeze those they hit, encasing them in a layer of ice. 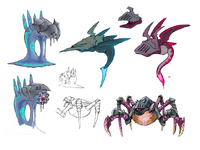