A Fire Master in the Xbox 360/PlayStation 3 version of Sonic Unleashed.

Monsters born of Dark Gaia with exceptionally high intelligence can take on a humanoid appearance like these fiends. These pyromancers are wreathed in a steady blaze that makes head-on attacks dangerous. Douse them with a water barrel, then go in for the beatdown.

The Fire Master (ファイアマスター, Faia Masutā?) is an enemy that appears in the nighttime Stages in Sonic Unleashed. They are a variant of Dark Gaia's Minions that resemble wizard-like phantoms. They specialize in fire-manipulating spells.

The Fire Masters' basic appearance is that of a humanoid phantom-like wizard. They are dressed in dark blue clothes with a blue tint, have a pointy hat and cape, and are decorated with magenta symbols. The only parts on their body that are shown are their yellow eyes and some of their dark faces. They are also always carrying a red, hook-shaped staff with a flame-shaped head and a glowing center.

The Fire Masters and the rest of Dark Gaia's Minions came into being when Dark Gaia broke apart at the beginning of Sonic Unleashed due to its premature awakening by Dr. Eggman. These fragments were then spread across the earth and became Dark Gaia's Minions, with the Fire Masters amongst them. Due to being born with high intelligence, they are able to take on a near-perfect humanoid appearance.[1] They first appear in Arid Sands Night Act II: Scorched Rock in the Wii/PlayStation 2 version and Arid Sands Night Act 1 in the Xbox 360/PlayStation 3 version.

The Fire Masters almost always appear with other enemies, but will rarely show up in pairs of themselves. In battle, they make little effort to avoid being hit as their fire-enveloped bodies protect them. Touching a fire-enveloped Fire Master in the Xbox 360/PlayStation 3 version will set Sonic the Werehog on fire, and his health will drop until the fire either wears off, the player loses a life, or Sonic touches water. In the Wii/PlayStation 2 version, however, it only briefly damage him. Also, in the Wii/PlayStation 2 version, fire-enveloped Fire Masters are invincible. However, their fire defense can be negated by dousing them with water barrels (though they can reignite themselves after a while) or if Sonic is in Unleashed Mode. Additionally, dousing them in the PlayStation 2/Wii version will leave them dazed for a few moments.

In the PlayStation 3/Xbox 360 version, the Fire Masters will attack the player by hitting Sonic with their staff by either using it as a club or by hammering it down on Sonic when enlarged, both of which will set Sonic on fire if the Fire Master itself is on fire. They can also shoot fireballs that both cause damage and will set Sonic on fire too. Additionally, the Fire Masters can move around in the air to avoid damage, which makes them hard to attack. In the Wii/PlayStation 2 version, the Fire Masters have much faster (albeit more limited) movesets. Constantly on the offensive, their only attack is quickly dashing into Sonic; though when their fire cloak is out, they will resort to either floating away or teleporting to avoid damage until they reignite themselves, which makes it difficult to get a fix on them.

Upon the reconstruction of Dark Gaia by Dr. Eggman, all of the Fire Masters (along with the other types of Dark Gaia's minions) were returned to the beast, who was later defeated and sealed within the planet's core.

The Fire Masters are able to move around by teleporting into an area in a puff of purple smoke or by emerging from black puddles on the ground. As a Dark Gaia minion, the Fire Masters can possess people by latching onto the deepest, darkest part of the heart, and generate despair, negative emotions or even erratic behavior that are completely opposite to the person's personality.

The Fire Masters are born with exceptionally high intelligence.[1] They are also capable of casting spells that grant them pyrokinesis, allowing them to fire condensed fireballs, or augment their own strikes with flames. They can also envelop their entire body in fire for defense, burning anyone who touches them. Additionally, they can use spells which instantly teleport them over short distances. They also have the innate ability to levitate above ground and can move through mid-air rather quickly.

The Fire Masters are very vulnerable to water, as dousing them in it extinguishes their flames, leaving them weakened and without defense. However, they can reignite their flames over time if they should go out. 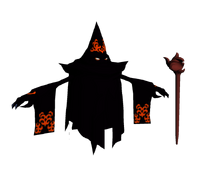