The Finalhazard, from Sonic Adventure 2: Battle.

Fusing with the Space Colony ARK

The prototype is still alive, and he's controlling the space colony as it's falling to earth! He's become one with the space colony, and is determined to keep it on its collision course!

The Finalhazard (ファイナルハザード, Fainaruhazādo?) is a tranformation that appears in the Sonic the Hedgehog series. It is the Biolizard, having transformed by fusing with the Space Colony ARK. When Sonic the Hedgehog and Knuckles the Echidna stopped the Space Colony ARK from colliding with the earth on its own, the Biolizard fused with the ARK to become the Finalhazard and keep the ARK on its crash course. However, it was defeated by Super Sonic and Super Shadow before it could destroy the planet.

When the Biolizard failed to stop Sonic and Knuckles from using the Master Emerald to stop the Chaos Emeralds, the Space Colony ARK lost the power source needed to keep it on its collision course with earth and destroy it. Acting upon the orders given by the late Gerald Robotnik, however, the Biolizard used Chaos Control with the Chaos Emeralds' power to teleport out of the Space Colony ARK's central core to the outside of the ARK, where it fused itself to the Eclipse Cannon's tip, thus becoming the Finalhazard. Now in control of the ARK, the Finalhazard resumed the ARK's crash course into earth by literally dragging it towards the planet. However, having lost its life support system in an earlier battle left the Finalhazard weak and vulnerable.

On the Finalhazard's way to earth, it was confronted by Super Sonic and Super Shadow and it engaged them in a showdown in space. Over the course of the battle, the two hedgehogs took advantage of the Finalhazard's weakened state and caused it enough damage to make its body start exploding and the beast slumped down in defeat. With its destruction, the Finalhazard became dislodged and its remains were presumably incinerated upon re-entry into the atmosphere.

With the power provided from the seven Chaos Emeralds and the Space Colony ARK, the Finalhazard was a powerful entity; despite weakened from its failed life support system, it took the combined strength of Super Sonic and Super Shadow to defeat it. Even then, both combatants acknowledged its strength as surprisingly great.

As its primary offense, the Finalhazard was capable of firing up to two pink lasers which had enough power to repel even a Super State user and cause them slight discomfort. Also, due to being physically connected to the Space Colony ARK, the Finalhazard could control the entire ARK, though it is not know to what extend other than controlling its crash course.[1]

In addition to new abilities, the Finalhazard's normal ones were greatly enhanced. Possessing a skin designed to absorb attacks, the Finalhazard's skin could generally withstand impacts from even a Super State, and its regenerative healing factor let it restore itself instantly whenever it was injured. Together, these abilities made the Finalhazard nearly invulnerable. The Finalhazard also retained its asexual reproduction abilities, allowing it to create pinks eggs seemingly out of nowhere. It also kept its magnetism manipulation powers, allowing it to move and repulse objects remotely, which had been refined to the point where it could arrange its eggs as a perfect shield and repulse them with enough force to knock a Super State away and cause them slight pain.

The Finalhazard's enormous power unfortunately came at a price: due to the loss of its life support system, it had to draw power from the Space Colony ARK to maintain itself and developed large red swelling areas on its skin, which were vulnerable spots in its otherwise impenetrable skin.

The Finalhazard, from the 2012 remaster of Sonic Adventure 2.

A battle in the space, where the player switches between Super Sonic and Super Shadow. Land six hits on the Finalhazard's swelling areas before time runs out.

Once the Finalhazard receives a total of six hits, it will be defeated. After about three minutes into the fight, the screen will turn an eerie red, signifying that the ARK is approaching earth. If over five minutes have passed and Finalhazard is still not defeated, the player will instantly die due to the fact that the ARK has reached earth's atmosphere and crashes into it. A character will remind the player about the time limit. 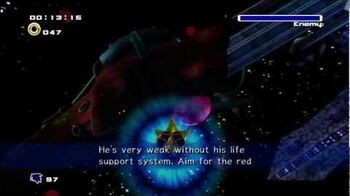 In the Sonic X anime series, the Finalhazard was named Final Lizard. Just like in the games, the Bio Lizard became the Final Lizard in order to keep the Space Colony ARK on its crash course with earth. Shortly after, however, the Final Lizard was confronted by Super Sonic and Super Shadow who destroyed its life support system and blew the Final Lizard to smithereens.

Much like in the games, the Biolizard became the Finalhazard in order to keep the Space Colony ARK on its collision course with Mobius, but it was defeated by Super Sonic and Super Shadow before it could succeed.