For the final boss in the console version of Sonic Unleashed, see Dark Gaia.

The unnamed final boss in Mazuri, from the mobile version of Sonic Unleashed.

The unnamed final boss is an object that appears in the mobile version of Sonic Unleashed. Powered by Gaia, it was the "most powerful robot" created and piloted by Dr. Eggman, who unleashed it on Mazuri to defeat Sonic the Hedgehog.

The final boss is a giant humanoid robot. It possesses a blue, cup-shaped torso with a red stripe across its chest, red shoulder guards, blue arms, and a pair of missile launchers on its back. In addition, the Egg Mobile can insert itself into the top of its torso, creating an orange dome.

As with most of Dr. Eggman other creations that use the Egg Mobile as its cockpit, this robot's head can detach and reattach itself to its body at any time. Its right arm can also detach itself and both fly and hover around on its own. Its back is also equipped with two reloadable rocket launchers which it can use to launch rockets a great distance across a city like Mazuri.

In the mobile version of Sonic Unleashed, Dr. Eggman used this robot to battle Sonic the Hedgehog in Mazuri. Despite its massive power however, the robot was still defeated by Sonic.

Sonic battling the unnamed final boss, from the mobile version of Sonic Unleashed.

To win, the player must use its fist attack to attack Eggman, it takes six hits to defeat the boss.

This robot is the final boss of the mobile version of Sonic Unleashed. It is fought with Sonic the Hedgehog after completing Mazuri Act 2.

The first part of the boss to appear is its arm and fist commandeered by Dr. Eggman from his Egg Mobile, who chases Sonic across Mazuri with it, attempting to crush him. After Sonic escapes the fist, Eggman will fly into the city skyline and attach his Egg Mobile to the body of the boss, which begins to march back and forth through the city of Mazuri in the distance while firing rockets at Sonic from its back.

After Sonic dodges a round of rocket fire, the Egg Mobile and the robot's arm will again detach from the main body and Eggman will try to crush Sonic under the fist once more. When the fist makes contact with the ground it will remain stuck for a moment, during which time Sonic can leap on top of the fist, bringing him close enough to land a hit on the Egg Mobile with the Spin Jump. When the Egg Mobile is hit, Eggman will fly back into the city and resume command of the boss.

After landing five hits on the Egg Mobile, the boss will start to fire a continuous stream of rockets at Sonic, who must run further into the level to escape, eventually reaching a second arena where the boss continues to fire rockets in new attack patterns. In this arena, the Egg Mobile will not fly low enough to be hit by a Spin Jump; instead, Sonic must leap onto the boss' fist in order to reach a switch at the right side of the arena. This switch activates a magnet to keep the Egg Mobile in place, allowing it to be hit. After landing this sixth and final hit on the Egg Mobile, this boss will be defeated, and Sonic acquires the yellow and orange Chaos Emeralds. 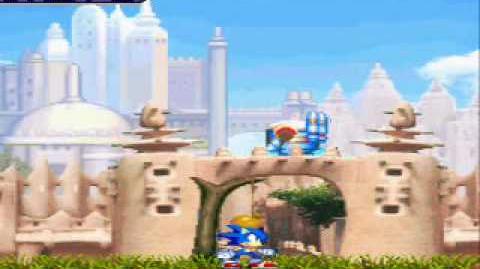