Sonic in Final Zone, from Sonic the Hedgehog (16-bit).

A sinister laboratory in Scrap Brain Zone, in which Sonic battles against Dr. Robotnik.

In the final, single-act encounter you have a split second to determine which giant piston of the Egg Crusher Dr. Eggman is hiding in. Watch the positioning of the electric orbs to find a safe gap.

Final Zone is located at the heart of the Scrap Brain Zone's base. It looks identical to Scrap Brain Zone Act 2. As such, it is located inside a building with many green walls that have electronic devices on them. The floors are as well made of light gray metal with warning signs on them.

It has the same background as Act 2 of the previous Zone.

After managing to make his way through the ruins beneath Scrap Brain Zone, Sonic enters Final Zone, where he arrives in the Egg Crusher room, where Dr. Robotnik is waiting for him. Despite the odds, Sonic manages to destroy the Egg Crusher, triggering a chain-reaction in Final Zone that forces Robotnik to escape in his Egg Mobile. However, Sonic hits the Egg Mobile while Robotnik escapes, making him crash.

Final Zone is a short, one-Act Zone. It features no gimmicks or obstacles, and consists only of the fight with the final boss of Sonic the Hedgehog: the Egg Crusher. As the player advances, they are unable to go back to the left.

Final Zone consists of a large flat corridor leading to the room with the Egg Crusher. After destroying the Egg Crusher, Dr. Robotnik will try to escape in his Egg Mobile. At this point, the player can either hit him with a Spin Jump to destroy the Egg Mobile and make it crash, or they can let Robotnik escape unscathed. Either way, this does not affect the ending of the game itself.

The boss of Final Zone is the Egg Crusher, a piston room controlled by Dr. Robotnik himself. Its arena consists of four alternating crusher pistons: two on the ceiling and two on the floor. Every now and then, two of the pistons will move upward and push against the surface on the opposite side of it. Robotnik will appear in a different piston each time, which the player has to hit in order to deal damage to this boss. After this attack, orbs of energy are produced at the top of this arena, which will have small gaps between them. These orbs are then fired at the playable character. To avoid these, orbs, the player must position themself between the orbs with the longest gap between them.

In the Sonic X comic series published by Archie Comics, Final Zone is referred to as Final Stage. It was a room within Scrap Brain Zone in a virtual world Dr. Eggman created to trap Sonic and his friends.

In the Sonic the Hedgehog comic series and its spin-offs published by Archie Comics, Final Zone was a location that appeared on Mobius during Operation: Clean Sweep. There, Sonic and his allies made their first decisive victory over Dr. Eggman in that reality.

After the events of Worlds Collide, Final Zone became a permanent part of Sonic's World with a history nearly identical to its game counterpart. 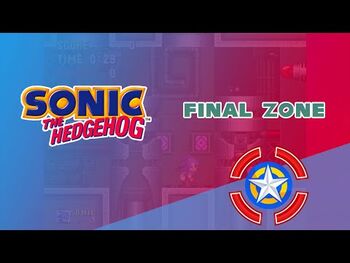