Sonic in Final Rush, from the 2012 remaster of Sonic Adventure 2.

The outside of the Space Colony ARK.

Outside the Space Colony ARK

Final Rush is the sixteenth and final stage of the Hero story in Sonic Adventure 2 and Sonic Adventure 2: Battle, and the last stage playable as Sonic the Hedgehog. It takes place on the Space Colony ARK, where Sonic is trying to reach the Eclipse Cannon.

After Sonic is blasted off the Space Colony ARK in a capsule that was going to explode in minutes by Dr. Eggman, Sonic uses the fake Chaos Emerald that Tails had given him to perform Chaos Control. He then warps back onto the ARK in front of a surprised Knuckles, who had just finished collecting all of the Master Emerald shards. Sonic tells Knuckles that he is going to continue with his mission of putting the fake Chaos Emerald in the Core.

Final Rush has more Rails than any other stage in the Hero story. The Rails have different pathways, all of which create separate routes to the Goal Ring. The stage also features an abundancy of Artificial Chaos and Hornet-series robots, making the stage much more difficult than the other stages in the Hero story.

1st Mission: Hurry and find the point of the Cannon!

Final Rush features three different high-speed warp tubes to choose from. The first three encountered will be guarded, though. The player will find them near the semi-middle and ending of the stage. There are multiple pathways, all of which lead to different places and unlock secret places or shortcuts.

There are plenty of Rings in this stage, but to collect 100 as quickly as possible, the player should try to jump onto the more difficult to reach Rails and aim for as many Item Boxes as possible.

After the fifth Point Marker, the player will stumble upon a long vertical Rail with a Spring on top of it. This Rail will lead to a platform that has two more Rails coming out from it. The player should take the purple Rail which leads to the Ancient Ruin, then play the Mystic Melody there to make two platforms appear up ahead. They should then jump onto the second platform and grind up the purple rail in front of it. To gain some speed, the player needs to Homing Attack onto it. The player must follow the short path it leads to and play the Mystic Melody again near another Ancient Ruin to make a row of Rings appear, then Light Speed Dash across them, grind down a series of vertical and horizontal Rails, and the section where the lost Chao will be up ahead.

The first Artificial Chaos encountered in the stage now attacks, so the player should jump from the Rail and perform a Homing Attack on it, then another to home onto the nearby Spring and get back to safety. Additionally, some platforms are now farther apart, so the player has to use the Homing Attack on Item Boxes and vertical Rails to reach them. In the final room, there is a giant Weight beside the two Artificial Chaos that covers the hole needed to get down. The player must destroy the Artificial Chaos on the right to reveal a Ball Switch that keeps the Weight suspended in air.

The Level Up Item in Final Rush is Sonic's Mystic Melody.

While jumping from the Spring mentioned above in the "Find the lost Chao" section, Big can be seen over a ledge when the player has reached the jump's apex. Big's location does not change in Hard mode. 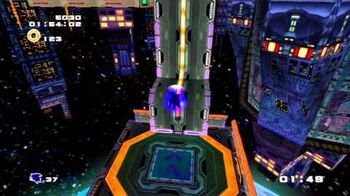 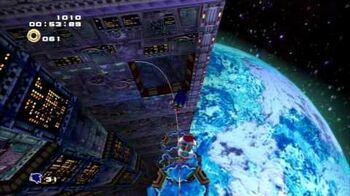 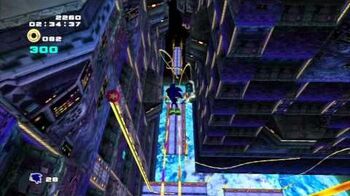 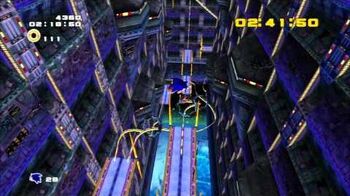 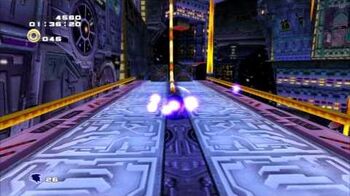