Sonic and the Avatar in Final Judgement.

A passage leading into the reactor of the Eggman Empire Fortress

The Phantom Ruby signal is headed for the reactor. You have to hurry!

Final Judgement (ラストジャッジメント, Rasutojajjimento?, lit. "Last Judgement") is the twenty-ninth and penultimate stage in Sonic Forces, and the fourth and final stage in the game to use the Tag Team gameplay style.

Situated below the Eggman Empire Fortress, this stage features a shaft leading straight down to the (decoy) reactor for the Phantom Ruby. During the events of the game, Sonic and the Avatar came here in order to destroy the reactor for the Resistance.

Final Judgement is basically a high-tech metallic shaft leading straight to the reactor core. Running down through the entirety of the shaft is a vertical pillar that the characters run down along. On this pillar is a road with tall rails on the sides. The shaft itself is lit up by lights on the walls, which include hexagonal-shaped lights, green power lines, and green power conduits.

On the bottom of the shaft lies a purple and green room which holds the reactor. The reactor itself is incorporated into the base of the shaft's pillar, which narrows in around the reactor. In the center of the reactor lies a structure resembling a nucleic acid double helix, which is covered by metal plates. This structure is surrounded by a circular platform, which have three tubes, each one containing Phantom Ruby prototypes, on it. The reactor also has a ring around it with laser drones attached to it, which only start shooting as the tubes are destroyed in this order: half after one tube, all after two, and then deactivating once all three are destroyed.

Thanks to Classic Sonic finding a way into the Central Tower, Sonic the Hedgehog and the Avatar make their way towards the area's reactor for the Phantom Ruby so they can put an end to Dr. Eggman's plans for good and end the War to Take Back the Planet in favor of the Resistance. Along the way, they are contacted by Tails via radio, who reveals that Infinite's Phantom Ruby copy is heading for the reactor, and urges them to hurry. Amy also warns them of the reactor defense system that awaits them, but Sonic is certain that they can handle it.

Closer to the reactor, Tails notices that it was here Eggman made Infinite who he was, which Amy feels is a sad place to be brought into the world. Regardless, Sonic and the Avatar manage to reach the reactor, much to Knuckles' amazement, and are able to destroy it, which triggers a massive explosion inside the fortress. Using the Double Boost however, Sonic and the Avatar are able to outrun the explosion and rejoin their friends on the outside.

Along the running routes of Final Judgement are giant wheels with saw blades that rotate in stationary positions. If the characters touch these wheels, they will be killed immediately. At one point, there are also three Grind Rails whose middle and outer rails switch between getting electrified. Should the player touch these rails while they get electrified, they will receive damage. A second before a rail gets electrified however, it will turn orange, giving the player a chance to switch rails to avoid being shocked and injured when it discharges.

At the end of the running section, the player will arrive on the circular platform around the reactor. Here, the player's objective is to destroy the three Phantom Ruby prototype tubes around the reactor. These tubes take multiple hits to be destroyed, although Super Sonic can do so in one hit by boosting into them. They will also occasionally surround themselves in electric force-fields that will inflict damage on the characters if they physically touch them while the fields are up. Every time a tube is destroyed, the reactor will blow up a little. Also, around the reactor is a ring that will sweep the circular platform with damage-inducing lasers. These lasers can be dodged by jumping over them. However, it is not until the first tube is destroyed that the ring starts firing lasers. The number of lasers will also double after the second tube is destroyed. 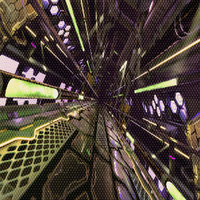