Shadow and Sonic in Final Haunt, from Shadow the Hedgehog.

Once every 50 years, that Black Comet passes by this planet. Do you think those Black Creatures are somehow connected with that comet?

Final Haunt is on of the sixth Stages in Shadow the Hedgehog. It can be reached by completing the Hero mission of either Space Gadget or Lost Impact.

After heeding Maria's plea and defeating the Artificial Chaos at Lost Impact, or beating Sonic the Hedgehog in a race for the cyan Chaos Emerald in Space Gadget, Shadow and Sonic are aboard the Space Colony ARK, and Sonic spots the Black Comet. Sonic fills in Shadow on what the Black Comet is, wondering if the Black Arms are somehow related to it. Shadow senses the presence of aliens aboard the comet and Sonic and Shadow then race off towards it, with them ending up using Tails' shuttle to fly across. Once aboard, Shadow can choose to either help Sonic find Black Doom at the core of the comet in his inner sanctum; as they follow his giant holographic broadcasts to hunt the alien prophet down, or aid Doom's Eye to fulfill a different mission - activate all four defensive shields to secure the comet against G.U.N.'s counterattack.

The following weapons can be found in Final Haunt:

While many Secret Doors are present in this Stage, they all contain the same things: Cell Cannon turrets. The first two have the turrets right behind them with good cover to protect them from being destroyed by energy shots from the Black Arms' gun ships. The second two lead to springs that bounce up to where the turrets have been deployed for dealing with the gun ships that appear in that area.

A shield is activated when it the shield switch is attacked, signified by a red ball on top. Don't shoot the switches again or they will shut off.

Because the stage is swarming with Black Arms, filling up the Hero Gauge should be simple. In fact, some rooms need to be cleared of Black Arms before Shadow can even continue. Do not hit any of the shield switches, as this will block off the Goal Ring and force the player to double-back to shut them back off. Use nearby Vacuum Pods to pull blocks out of the walls and stop lasers.

There are no shield switches to activate in Final Haunt's Expert Mode, so the player will need to get through the Stage using the Hero path. The Goal Ring is now located where Black Doom was. 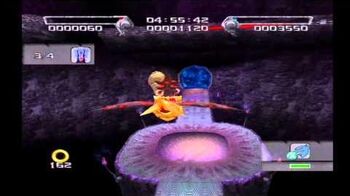 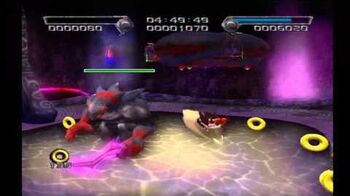 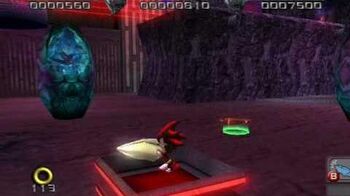