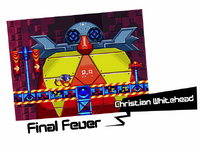 Final Fever was the cut true final round of the 2011 remastered version of Sonic the Hedgehog CD that was only able to be accessed if the player had all of the Time Stones. It is named after the music track that normally plays during the Metallic Madness boss.

According to the director of the 2011 re-release of Sonic the Hedgehog CD, Christian Whitehead, it would have taken place in a distorted time warp and the boss was planned to be virtually invincible in its current form. The only way to defeat it would be to warp speed to "wind back the clock" and destroy parts of it when it was more vulnerable (possibly being built). It was planned to use the "Final Fever" music track, with the previous boss using the standard boss theme if this round is next. Interestingly, it bears an "R-9" mark - a reference both to Robotnik and it being the long awaited ninth Round (should R2 be completed).