Sonic News Network
Register
Don't have an account?
Sign In
Advertisement
in: Sonic and the Black Knight stages

Faraway Avalon (ファラウェイ・アヴァロン, Farawei Avaron?) is the seventh and last area of the first part of Sonic and the Black Knight. The area contains the second and final boss fight against King Arthur.

Faraway Avalon is an elegant place, with large golden structures throughout.

Sonic is told by Merlina that he must head to Avalon, where King Arthur is staying. After confronting him at Avalon along with Caliburn, Sonic battles and defeats King Arthur. At the end of the fight, Sonic knocks the king off his horse and the horse disappears. After celebrating his victory, the king also disappears, leaving nothing behind but the Scabbard of Excalibur.

Throughout the entire boss fight, Sonic must chase and avoid the more orthodox attacks of King Arthur such as lightning spells and wormhole slashes before he drops hazardous red orbs.

To attack, Sonic must swing his sword with correct timing or use Soul Surge to deflect the red orb attack back at Arthur. Once Arthur is countered, he will be stunned and Sonic can catch up via Soul Surge, leading to two rhythmic Real-Time Interactions, the first being in regularly timed deflections before the second chase and the final one being in quick succession of back-to-back double slashes, with a long pause in between each of Arthur's attempts to throw Sonic off, before landing the winning blow. 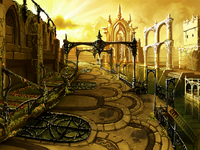