The Fan in Sonic Generations.

A large fan embedded in a surface.

The Fan[1] (ファン, Fan?), also known as the Fan Block (扇風機ブロック, senpūki burokku?, lit. "electric fan block"), is a recurring gimmick and obstacle in the Sonic the Hedgehog series. They are large fans that can push the player in one direction with their air currents.

The Fans, as their name implies, are mechanical fans. The basic design of the Fan is a circular frame surrounding an impeller which is either embedded into a surface or sometimes floating in midair. However, the finer details in their design differ from game to game. When active, they constantly blow out an airstream.

In gameplay, the Fans are used by to move the player through their air streams. By entering a Fan's airstream, the playable character will automatically follow it, even into midair, the latter which is commonly used by the player to reach higher areas or move across obstacles. However, each Fan has a maximum for how high the player can be risen into the air. Inside the Fans' airstream, the player can still control the playable characters' movements, though moving outside of it will cause the normal physics to take effect again. In some cases, they are also found in underwater sections where they create underwater currents that automatically pushes the player away from them, which either serves to automatically move the player through underwater passages or push them away.

Fans first appeared in Sonic the Hedgehog (1991), where they are serve as obstacles in Star Light Zone. These small, side-facing Fans are usually set at the end of ledges or in the middle of pathways. When the player runs behind it, it will pull Sonic through it to the other side, but when the player tries to run past it from the front, it keeps pushing Sonic back.

There are also other variations of Fans, which pull Sonic out on the back side instead. Unlike other Fans, these variations turn on and off for a small amount of time. Normally, Sonic is not able to get past any Fans from the front by running. However in Sonic Jam port and 2013 re-release of the game, the player can use Spin Dash or Super Sonic to get through them.

In Sonic the Hedgehog 2, Oil Ocean Zone has different types of floating golden Fans. They are found in wide gabs where they point upwards, which the player has to use to cross said gabs. Fans can be tricky to use this way since some of them turn on and off for a while. The player can only move left and right while floating above these Fans. These upwards pointing Fans can also be found below the ground and are barely seen behind the fence. There are also vertical Fans that are usually set in front of platform elevators. The player has to wait until they turn off in order to get past them, but using the Spin Dash or Super Sonic can make getting through easier.

In Wing Fortress Zone, there are larger, upwards pointing Fans, that can make the playable character float in the mid-air. Like the ones in Oil Ocean Zone, the player is unable to jump, but can move left and right.

In Sonic the Hedgehog CD, small yellow Fans appear in Tidal Tempest. Placed either on the walls or floors in underwater sections, they remain inactive until the player presses a nearby Switch. They will then guide the player to either higher pathways or along underwater routes.

left or right and can better reach far-away UFOs this way.

In Sonic the Hedgehog 3 and its add-on continuation Sonic & Knuckles, Fans are featured as gimmicks at Hydrocity Zone and Carnival Night Zone. In Hydrocity Zone, blue and gray colored vertical Fans are usually set on small blocks or the ground. They work similarly to ones from Oil Ocean Zone, as the player has to balance on them to progress on the Zone. Some Fans have to be activated by pressing the switch placed near close of them. In long shafts, Fans will pop out from walls and make the player float upwards. In Carnival Night Zone, Fans are set on bridge formations above large sections of the Zone. Some of these formations have small gaps, where single Fans move back and forth between gaps. When moving into these Fans, they make playable characters float and can only move left and right.

Flying Battery Zone has platforms which are powered by Fans beneath them, but they can damage the player by touching them. In the Competition Mode of the game, Chrome Gadget also has grey fan turbines that can make the player float and reach higher platforms.

In Sonic 3D Blast, Gene Gadget Zone and Panic Puppet Zone feature groups of flat industrial fans[4] placed on the ground. In gameplay, they become active once Sonic steps on them, causing him to float above them in isometric perspective. When landing, the player has to look out for Badniks or electrified floors.

The Fans appeared in Sonic Adventure and its later iteration Sonic Adventure DX: Director's Cut. In this game, they float in midair and possess a grey frame, a net on the bottom and red propellers. They only appear in Casinopolis' sewer sections, and Sonic's version of Final Egg. To use it in gameplay, the player has to move over them to float and can move around with the Control Stick.

In all three Sonic Advance games, Fans appear as gimmicks in certain Zone in each game. In Egg Rocket Zone, large, yellow Fans are set on corridors, which can make the playable character float to higher sections.

In Sonic Advance 2, Sky Canyon features three types of Fans. One type is a smaller, side-facing red Fan that is usually set on the end of ledges. It works similarly to ones from Star Light Zone from the original Sonic the Hedgehog, except it will build up running momentum when the player turns to run in the other direction. The second type is a floating wooden windmill set in small gaps. When the player runs towards it at high speed, it will make them curl in spinballs and spin on the windmills until it launches the player upwards to higher section. The third, larger type of Fan is similar to ones from Egg Rocket Zone in Sonic Advance.

In Sonic Advance 3, there are gimmicky platforms powered by Fans in Ocean Base. Fans will start to operate and the platform moves up, when the player keeps jumping on the red button of the platform.

The Fans' next appearance was in Sonic Heroes. In this game, the standard Fans are quite large with a red core connecting its blades which spin slowly and they have a red frame with blue and yellow frames below it. Additionally, there are much larger fans that are a part of the Stages' environment: in Rail Canyon and Bullet Station there are Fans encapsulated behind metal frames, and in Mystic Mansion and Terror Hall there are Fans made of skeleton bones. Most of these fans are located on the ground, and if they are disabled, the player has to use Switches to activate them.

To use the Fans in gameplay, the player has to use the Triangle Dive/Umbrella Descent/Bubblegum Descent above the Fan and the player will instantly rise into the air. Simply standing over the Fans though will make the playable characters float around a few inches above it.

In Shadow the Hedgehog, the Fans have a grey frame and their impellers are encapsulated behind metal webs. In this game, Fans can be found on both the ground and the walls, allowing Shadow to move both vertically and horizontally through mid-air. To use the Fans in this game, the player simply has to enter the Fans' airstream.

Some of the fans on the ground will push the player away without any means of outrunning their air streams. However, they stop in intervals so the player can continue. They can also be bypassed with Chaos Control.

In the Wii version of Sonic Colors, the Fans have a simple red frame but they are much smaller, only being little over a meter in diameter. They are usually seen in the game's 2.5D sections of the Acts and underwater sections, the latter where they sense the player approaching and begin generating jet streams that pushes the player back. To use them in gameplay, the player just has to step into the Fans' airsteam to be lifted up and then jumps when the Fan's created air reach it's maximum.

In Sonic Generations, Fans look just like they did in Sonic Colors. In this game, they only appear in Crisis City and Seaside Hill, where they in the latter are also found in underwater sections. To use the Fans in gameplay, the player just has to step into their airstream to get airborne and then jump when the Fan's created air reach it's maximum.

In the Nintendo 3DS version, Fans appear exclusively in Tropical Resort where they take the same shape they took in Sonic Colors, but without legs. The player can also Spin Jump after reaching the apex of a fan's airstream in this version.

In Sonic the Hedgehog 4: Episode II, Fans are one of the main gimmicks of Sky Fortress Zone Act 2 and Act 3. In this game, they are yellow turbines pointing upwards and like in earlier games, the playable character starts hovering whenever they pass above Fans. Also, getting close to a Fan or being right below it sends the player floating higher above it. 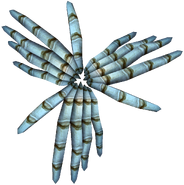 The skeleton fan in Sonic Heroes.

Two Fans in Tropical Resort of the Nintendo 3DS version of Sonic Generations.
Add a photo to this gallery

Retrieved from "https://sonic.fandom.com/wiki/Fan?oldid=1912252"
Community content is available under CC-BY-SA unless otherwise noted.