For the character in Tails' Skypatrol, see Focke-Wulf.

Falke Wulf, also known as Falke the Wolf,[1] is a character that appears in the Sonic the Hedgehog comic series and its spin-offs published by Archie Comics. He is a mobian wolf and a member of Wendy Naugus' Witchcarters.[2]

Since the name of the game counterpart to Falke sounded too similar to a certain inappropriate word, this character was named "Falke" since it sounded similar to the original and it was a model of plane by the Focke-Wulf company, which Ian Flynn figured would honor the original.[1][3] His head shape and markings were designed after Lupe the Wolf, while his clothing was designed after his vehicle.[1]

Falke is a mobian wolf who has dark blue fur, blue eyes and tan skin. His nose is red, and his gloves and shoes are navy and mustard yellow.

Falke was employed by Wendy Naugus and worked together with her and his fellow Witchcarters, Carrotia the Rabbit and Bearenger the Grizzly to take control of an island. He was beaten by Miles "Tails" Prower as the latter wanted to save his friend, Sonic the Hedgehog.[4]

Years later, Falke was forced to work for Wendy Naugus so that she and her brother could take control of Eggman Land. Here, he was granted the power of Dark Gaia energy and was able to manipulate it into deadly beams for combat. When Dr. Eggman came to investigate the group's intrusion, Falke and his allies easily drove the doctor off.[2]

After the battle, Falke and the Witchcarters kept a lookout for any intruders, where they soon engaged Lord Mordred Hood and Conquering Storm in combat.[4] Falke and his team proved more powerful, but the Egg Bosses Tundra the Walrus and Akhlut the Orca shut down the generator from where the Withcarters harnessed their power. Now weakened, Falke and the Witchcarters were defeated in no time. Mordred Hood then broke Wendy's hold over Falke, and the Witchcarters, leading them to join the Egg Bosses for revenge on Wendy. However, they were quickly brought under Wendy's control again when they confronted her.[5]

Falke would engage Eggman and his Egg Bosses one more time, but was defeated more easily as Wendy had trouble controlling him in the heat of the battle. After Wendy was made an Egg Boss on a whim, she regained control over Falke and the Witchcarters and they all got implants from the Injector for communication and discipline.[6]

Panic in the Sky

Later on, Falke and the Witchcarters were ordered by Dr. Eggman to assist the Hooligans and Metal Sonic in robbing Castle Acorn of the Chaos Emeralds and the Gaia Keys.[7] Falke and the Witchcarters distracted the Royal Guard long enough for the Hooligans to steal the Emeralds and Keys from Castle Acorn and then proceeded to slow down Gemerl.[8] However, when Cream the Rabbit, Cheese the Chao, and Big the Cat rescued the Gizoid, Falke and his allies were forced to retreat.[9]

Falke Wulf is a giggling maniac and the most unhinged member of the Witchcarters. He is constantly laughing, even when he is asleep.[2]

Like the other Witchcarters, Falke has some skill in using Extreme Gear and is dangerous in combat. Using powers he gained from Dark Gaia Energy, Falke can throw energy blasts. 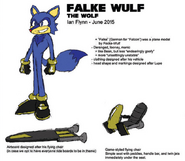 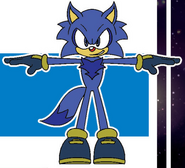 Retrieved from "https://sonic.fandom.com/wiki/Falke_Wulf?oldid=1974315"
Community content is available under CC-BY-SA unless otherwise noted.