The F-6t Spider Troop Big Foot - Ground Air Combat Walker is a vehicle that appears in the Sonic the Hedgehog series. It is a bipedal military fighter mech used by G.U.N.'s foot soldiers in the Scorpion Troop.[1]

The Big Foot is an anti-terrorist, military fighter which has mechanical legs. It is equipped with missile pods and hover jets to take off vertically and a rotary machine gun.[1]

In Sonic Adventure 2, a F-6t Big Foot was sent after Sonic the Hedgehog, who had been declared an enemy after supposedly stealing a Chaos Emerald. When the F-6t Big Foot found him, its pilot engaged Sonic in battle, but was soundly defeated.

The Hot Shot is almost exactly the same as Big Foot, with the same weapons and capabilities. However, it also has an added lock-on laser its front. It first appeared in Sonic Adventure 2.

The Flying Dog is basically the Hot Shot without legs. Without walkers, the Flying Dog remains hovering during its operation. It also has an improved defense, as it takes five strikes to destroy. Once four strikes have been dealt, the Flying Dog simply stops using missiles and machine guns, and instead launches its plasma cannon repeatedly. It first appeared in Sonic Adventure 2.

The Big Foot Type A is one of the strongest mechs belonging to G.U.N., following the F-6t Big Foot. In combat, they carry Gatling Guns to use against their enemies. These first appeared in Shadow the Hedgehog.

The Big Foot Type B is a variant that utilizing 8-Shot RPGs to attack foes. It is one of the strongest mechs used by GUN Soldiers, being G.U.N.'s strongest unit. These first appeared in Shadow the Hedgehog.

The battle takes place in the night-time of City Escape, and the boss is defeated by attacking its cockpit.

The Big Foot begins by flying up and strafing the ground with machine gun fire. It’s easily seen and does not move very fast, and the player can run in a wide circle to avoid it. After a few passes with the machine guns, the Big Foot will land and the missile bays will open. Predictably, missiles shoot out at the player, who must once again run around the edge of the circle until the barrage stops. As soon as the missile pod's doors close, the player must leap high into the air and Homing Attack the Big Foot’s cockpit. After four hits, the Big Foot will collapse.

As an easier way to defeat the Big Foot in less than a minute, the player can jump on top of Wooden Containers before it destroys them, and launch a Homing Attack at it. It is also possible to hit Big Foot's cockpit with a Bounce Attack while it is in the air, although Sonic requires the Bounce Bracelet found later in the game to do so. 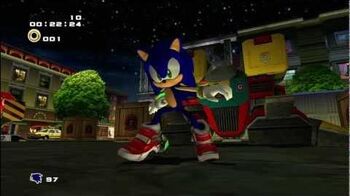 In the Sonic X anime series, the Big Foot appeared in the episode "Shadow Knows". After escaping the Gun Beetles, Sonic was confronted by a Big Foot. Sonic used his Spin Attack to defeat the Big Foot, though the robot still fired several missiles at Sonic, which he directed back at it to blow the mech to pieces.

In the Sonic the Hedgehog comic series and its spin-offs published by Archie Comics, the Big Foot serve as mechs in G.U.N.'s army. They appeared during the brief attack on Central City by Dr. Eggman.

"This is spider troop Big Foot. Big foot to headquarters over! Reengage the enemy and request back up!"
—Big Foot pilot, Sonic Adventure 2