A time-space rift caused by the collision of Sonic and Blaze's dimensions.

Exception (イクセプション, Ikusepushon?) is a Zone in Sonic Rush. It is the ninth and true final Zone in the game. Unlike most other Zones in Sonic Rush, Exception consists only of a Boss Act devoted to the fight against the Egg Salamander. It is accessible in the Extra story in Gameplay which is available after collecting all of the Chaos Emeralds in Sonic's story and the Sol Emeralds in Blaze's story, and completing both characters' stories. It takes place inside a dimensional rift created by the intersection of Sonic and Blaze's world.

The zone is a multicolored dimensional rift that is the result of Sonic's world and Blaze's world merging together to form one. As the fight goes on, the background starts to fluctuate changing from yellowish-red to orange to red, and it finally starts fluctuating wildly when near the end.

Having come together, Sonic and Blaze use the powers of the Chaos Emeralds and Sol Emeralds to become Super Sonic and Burning Blaze respectively to fight Dr. Eggman and Eggman Nega, who are each controlling a robot known as the Egg Salamander, in Exception.

At the end of the battle, Super Sonic and Burning Blaze get ready to end this. Eggman Nega, still refusing defeat, claims he will succeed, but Eggman starts panicking and tells him to shut up. Super Sonic and Burning Blaze then use their combined powers to destroy the Egg Salamander once and for all in a massive explosion. Afterward, Sonic and Blaze see that everything will go back to normal with the Eggmen defeated. Blaze, however, says that she must return to her world, as the Chaos and Sol Emeralds cannot exist in the same world without causing another crisis. Realizing it is time to say goodbye, Sonic tells Blaze that Cream will miss her. Blaze, however, says that she has no choice but to leave without saying goodbye, as it is appropriate that she leaves the same way she arrived in Sonic's world: as a stranger. Regardless, Blaze thanks Sonic for all his help and prepares to leave. Sonic, however, interrupts her and gives her his personal promise that he will see her again. Accepting this promise, Blaze shakes hands with Sonic, just as their worlds begin restoring themselves and pull them away from Exception in a bright light.

The player takes turns in controlling one character a time. First the player uses Super Sonic in the top screen who fights Eggman and can only use the Super Sonic Boost with

. In order to damage Eggman's mecha, Sonic has to deflect the two small satellites that Eggman fires back at his cockpit. After getting hit, Eggman fires some energy beams which can also be deflected back at him. Eggman will occasionally even go into the background and fire rockets which Sonic has to dodge or lose 5-7 rings if hit. He will also attack Sonic using the robot's sword. After three hits, the Eggmen will take to the bottom/touch screen with Eggman Nega now controlling the mecha to fight Blaze.

As Burning Blaze, she can dash like Sonic but only with

, and she can also generate fireballs with

. Nega fires lasers much more quickly than Eggman, and he mainly attacks by using his claws to knock her back. Sometimes, he will hold out a claw and fire it at Blaze. If the player manages to dodge it, it will leave him vulnerable to an attack. If the player fails to attack, Nega will grab Blaze and hit her with the other claw, causing her to lose rings. Other times, he'll go into the background and cause a spatial rift which will not only pull Blaze in, but also any rings nearby. To dodge the rift, the player must dash numerous times until the rift disappears. After getting hit three times, the villains will return to the top screen, and back again. The pattern will continue 5 times. 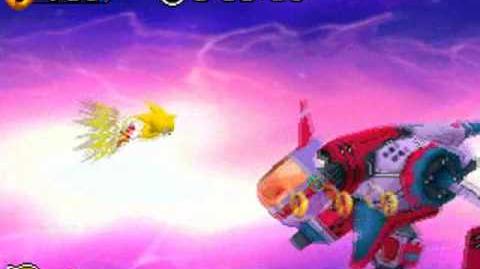