Sonic News Network
Register
Don't have an account?
Sign In
Advertisement
in: Swords, Sonic and the Black Knight, Transformations

Excalibur, from Sonic and the Black Knight.

That's the greatest of the sacred swords... Excalibur!

— Nimue, Sonic and the Black Knight

Of all the sacred Swords, Excalibur resembles mostly Caliburn's normal form. Excalibur is gold and silver, then he gains a crown-like figure on his pulled back hilt with ruby in the center, and a glowing outer blade around his physical blade.

Long ago, Excalibur was originally guarded by Nimue, the Lady of the Lake, along with its scabbard. The sword itself rested in the lake in Deep Woods where it was held up by fairy magic. One day, however, a young King Arthur came to the lake to seek out a new sword to replace his broken one. Nimue decided to bestow both Excalibur and its scabbard to Arthur, because he had proven himself worthy of character to wield them. Excalibur eventually became King Arthur's personal weapon, and he used it to save the kingdom countless times.[1] However, Arthur apparently never chose to wield it in public, or at least never in front of the Knights of the Round Table.

When Arthur grew corrupted from possessing the scabbard of Excalibur's power, the king's evil tainted Excalibur, transforming it into Deathcalibur.[2] As Excalibur's light was ultimately locked away, the sword somehow split into the sacred swords Arondight, Galatine, Laevatein and Caliburn, though Arthur still managed to retain Deathcalibur. With Excalibur gone, the blade itself faded into legend.

In Sonic and the Black Knight, as Sonic confronted the Dark Queen, he was pummelled to an inch of his life and got Caliburn cut in half. Regardless, Sonic refused to give up, having resolved to stop Merlina no matter what. With Sonic's determination shinning brighter than ever, the lost light of Excalibur was reawakened within the sacred swords and Nimue had the Knights of the Round Table send their sacred swords to Sonic and Caliburn. The power of all four sacred swords then transformed Sonic into Excalibur Sonic and not only repaired Caliburn, but also transformed him into the true Excalibur.

In Sonic Dash, Excalibur appears as the weapon wielded by Excalibur Sonic during gameplay.

In Sonic Forces: Speed Battle, Excalibur appears as the weapon used by Excalibur Sonic as a part of each of his Item Box power-ups. 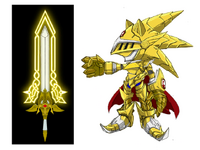 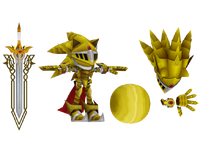