Tails in Eternal Engine, from the 2012 remaster of Sonic Adventure 2.

The inside of the Space Colony ARK.

Eternal Engine is the thirteenth stage of the Hero story in Sonic Adventure 2 and Sonic Adventure 2: Battle, and is the last stage playable as Miles "Tails" Prower. This stage marks the heroes' first venture inside the Space Colony ARK.

Tails' mission is to navigate through the Space Colony ARK to find the power generator and destroy it, so that Sonic can place the fake Emerald in the Eclipse Cannon.

The primary gimmick in this level is the dynamite hatches. Whereas in other stages, dynamite is used to perform useful demolitions, shooting dynamite in this stage results in the creation of a vacuum field that attempts to suck Tails out into space from close range, and succumbing to the field results in loss of life. The dynamite packs are also attached to platforms which make navigation much more difficult upon their destruction. Tails must avoid shooting these dynamite hatches, while also destroying the many G.U.N. robots.

The best approach to completing this mission is to move as quickly as possible while still proceeding with caution. Precise use of the Lock-On Missile is imperative. If one stays along the main path and does not get hit, it is possible to collect 100 Rings in under 3:30.

The first time it is possible to step outside after passing the first Point Marker, an Ancient Ruin can be found atop a floating platform. The player must Hover over to this ruin and play the Mystic Melody. A series of stone blocks will then appear, leading to a metallic platform. This platform can elevate the player to another stone block, from which the player must Hover onto another metallic platform moving from left to right. Once there, the player should wait for the platform to float as far as it can move in either direction before they can leap off and Hover toward the door.

After passing through the door, the player should not shoot the Artificial Chaos inside the room, as doing so will cause every space hatch in the room to open. Instead, they must run past the enemy and into the next room. The player should jump onto the cages and wait until the moving platform gets toward the middle, then jump to it. When the platform floats closest to the door, the player must jump and Hover over the laser field, then go through the door to reach the lost Chao.

Time is tight in this stage, so the player has to move quickly. There are no real shortcuts, so it is up to practice and mastery to finish the stage in time.

The only differences in this mission compared to the first mission are the number of enemies and the addition of more space hatches.

The Level Up Item in Eternal Engine is Tails' Bazooka. It will allow him to break Steel Containers.

After getting the Bazooka Level Up Item and going into the hallway past it, Big can be seen beyond the third window on the left. 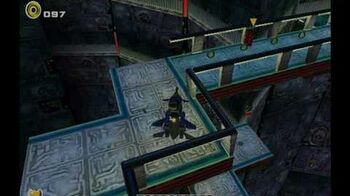 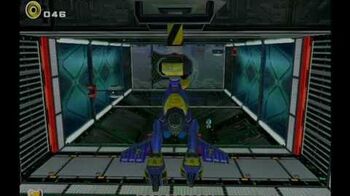 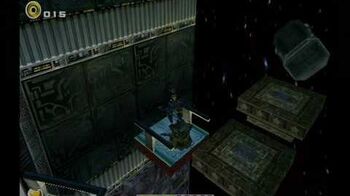 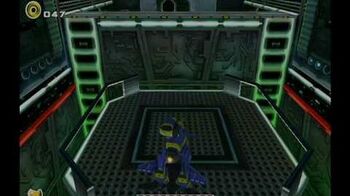 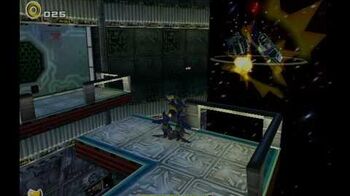