The ruins of the enemy-besieged part of the City.

Enemy Territory (敵勢力圏, Teki seiryoku-ken?) is the first stage in the Sonic Forces DLC, Episode Shadow. Set in the City, it is a modified version of Sunset Heights and Park Avenue, and thus, features similar elements.

Enemy Territory takes place in a ruined section of the City that has fallen under enemy control. During the events of the game, Shadow came through this territory in order to link up with E-123 Omega at the site of one of Dr. Eggman's bases.

Enemy Territory is a deserted, Eggman Empire-besieged town area in the City set during a partially clouded sunset that adds to the overall glum mood of the stage. The area's densely-built buildings resemble those found in real-life cities like San Diego. Enemy Territory itself is built in a blocky hill landscape with layered soil in different shades of brown and green grass on top of the hills that favors Green Hill. There is also a long red bridge in the background that stretches across a large portion of Enemy Territory. Also depicted in the background is a costal area with a green island landscape that is connected to Enemy Territory by small bridge pathways.

Enemy Territory shows a scenario of complete desolation, with structures—buildings and houses, among others—having been destroyed by enemy forces. As such, much of Enemy Territory lies in ruins, with most of the local structures having suffered heavy damage and/or having been set ablaze.

Taking place about a month before Dr. Eggman's global takeover, Enemy Territory gets a visitor in the form of Shadow the Hedgehog. Shadow, seeking to link up with E-123 Omega to do a reconnaissance mission with him at a suspicious Eggman base, makes his way through the City while Rouge guides him over the radio. However, Omega soon reports that he has begun a frontal attack on Eggman's base, much to Rouge's annoyance. Shadow, however, is hardly surprised by this turn of events.

Not long after, Omega reports that he has met a hostile entity, and has been left completely disorientated, much to Rouge's worry. Omega is soon back again though, only to report more system damage while talking nonsense. Shadow tries to ask Omega for answers, but soon loses contact with the E-Series robot completely.

Leaving Enemy Territory, Shadow heads to Omega's last recorded coordinates. There, he meets Infinite, who has defeated Omega as a test of his new powers. Shadow demands answers, but all Infinite cares about is having this "reunion" with the black hedgehog. Though Shadow says that he does not know him, Infinite knows otherwise, and begins telling Shadow about how they met several months ago...

Enemy Territory is a fast-paced stage with an overwhelming number of enemies and obstacles, such as iron balls. The iron balls in particular either float around in certain patterns or are attached to the ends of revolving bars (that either sit on the ground or float in midair) that obscure the player's path. The stage also includes balloons for the player to bounce on.

Akin to a Sonic stage, Enemy Territory has numerous Wisp Capsules filled exclusively with White Wisps along the way for the player to charge their Boost Gauge with.

The stage starts out in a 3D perspective. First, the player must run down a road, which eventually has a view of the City on the left. After getting past the City view, Shadow will reenter the denser city area.

In the city area, the player must make their way through enemies and across stoops, before arriving on a sloping street with Springs at the end. These Springs will launch Shadow towards another street that lies across a gap. Once across the gap, continue down the street Shadow lands on until he enters a round plaza with revolving iron balls. In front of the plaza is a loop which the player must pass through to enter a 2.5D section. After passing the Star Post in that section, follow the main route up to a section made entirely of Unbreakable Containers and solid platforms that form corridor-like paths and roads. This section is ridden with iron balls, balloons and lines of Galaga Bees that the player can use to take shortcuts. Upon exiting this section, the player will arrive on a final stretch of path that leads straight to the goal. 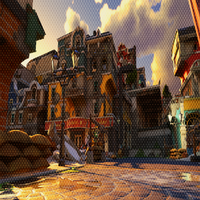 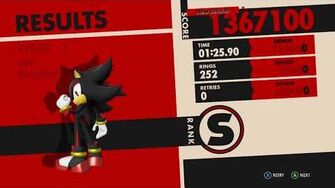