An Emerald Shard, from Sonic Runners.

A shard of a Chaos Emerald or the Master Emerald.

If it's in pieces, I can restore it!

The Emerald Shard[1] (エメラルドのかけら[2][3], Emerarudo no Kake-ra?, lit. "Emerald Fragment"), also known as the Master Emerald Fragment,[4] or simply the Emerald[5] (エメラルド[6], Emerarudo?), is an object that appears in the Sonic the Hedgehog series. It is a fragment of either a Chaos Emerald or the Master Emerald, created when the gems have been forced into shattering. Bringing them back together will reform their gestalt Emerald.

In Sonic Blast, a Chaos Emerald that Sonic had was accidentally hit by a laser from Dr. Robotnik, who tried to zap Sonic with a laser gun while he was sleeping. This caused the Emerald to shatter into five multi-colored Emerald Shards, which flew away. Sonic subsequently teamed up with Knuckles to find the shards and stop Robotnik.[7]

In Sonic Adventure and its enhanced port Sonic Adventure DX: Director's Cut, Dr. Eggman shattered the Master Emerald to release Chaos, making Knuckles go on a search to find its Emerald Shards after the shards spread like a shower of green meteors across the north of Station Square.[8] In each of Knuckles' Action Stages, the player has to find all the Emerald Shards within it to complete it. To locate the shards, the player has the Emerald Radar. Once Knuckles acquired all of the shards, he reassembled the Master Emerald on Angel Island.

In the original Dreamcast version of the game, they are a very dark green and hard to see against some backgrounds, but in Sonic Adventure DX: Director's Cut, they are much more radiant and easier to see. When touching a shard, it will float up over Knuckles and disappear in a burst of sparkles.

In Sonic Adventure 2 and its enhanced port Sonic Adventure 2: Battle, Rouge and Knuckles were fighting over the Master Emerald. Dr. Eggman attempted to steal it, but Knuckles smashed it to prevent the theft, so he and Rouge began hunting down its Emerald Shards. In the majority of Knuckles and Rouge's Stages, the objective is to find all the Emerald Shards' present. Once again, the player has the Emerald Radar to pinpoint their locations. In the Treasure Hunt Races in the game's two-player mode, the Emeralds Shards are to be located by the players in a similar fashion.

The two treasure hunters eventually gathered all the shards, though after Knuckles saved Rouge's life, she returned her shards to Knuckles with reluctant gratitude, which let Knuckles reassemble the Master Emerald.

When Sonic tried to use the Master Emerald to neutralize the Chaos Emeralds inside of the out-of-control Emerl, Emerl smashed the Master Emerald into tiny pieces and the pieces were not seen for the remainder of the game, though it is highly likely they were recovered and reassembled. At the end of Emerl's story, Emerl exploded, smashing the Chaos Emeralds within him, turning them to Shards with Emerl's "soul" within them.

In Sonic Runners, the Emerald Shards appeared again as fragments of the Master Emerald called Master Emerald Fragments.[4] When Dr. Eggman tried stealing the Master Emerald, Knuckles smashed it into several fragments which dispersed far and wide to keep it safe. Both Team Sonic and Eggman thus began tracking down the fragments. While Team Sonic found some without trouble, they sometimes had to fight Eggman and Metal Sonic for them. Eggman initially had the upper hand thanks to an Emerald Detector, but Team Sonic took it from him and used it to find the remaining shards and reassembled the Master Emerald.

In gameplay, the Emerald Shards appear during the "Treasure Hunt Event". In terms of gameplay, they are similar to the pink crystals found in the "Save Amy Event". They spawn at random in all game's worlds. After spawning, the player will have three minutes to collect as many as possible before they disappear. Upon collecting 3000 of them, Sonic & Knuckles Trail is unlocked: it will also contribute to the unlocking of Treasure Hunter Knuckles as a playable character. The Emerald Shards also respawn every third minute.

In the Sonic Underground television series, when Dingo accidentally dropped a Chaos Emerald from a great height, it shattered in two. This resulted in the release of the chaos energy within, causing a great amount of disasters around Planet Mobius. Dingo's attempt to put the two shards back together only shocked him with the immense discharge, and Sleet's attempt to contain them inside a transformed Dingo only caused the latter to turn into a powerful mutant monster. Only a special canister can contain the loose chaos energy from tearing the planet apart.

In the Sonic X anime series, the Emerald Shards make a few appearances. In this media, the only Emerald Shards shown are the fragments of the Master Emerald. 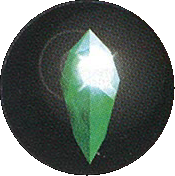