For other uses of the term, see Emerald Hill (disambiguation).

A green hill with cascading waterfalls

Speed through this tropical bayside resort with palm trees, loop-de-loops and corkscrew speedways. Watch out for monkey-business!

Emerald Hill Zone (エメラルドヒル[2], Emerarudo Hiru?, lit. "Emerald Hill") is the first Zone of Sonic the Hedgehog 2. It is a tropical paradise on the shores of West Side Island. As with most other Zones in this game, Emerald Hill Zone consists of two standard Acts with a boss fight at the end of Act 2.

Plains of verdant grass and beautiful beaches draw instant comparisons with South Island's Green Hill Zone, but Emerald Hill Zone has a character all of its own (only small parts of the soil have checkered pattern, for one). The level is a grassy, green Zone with plenty of easy obstacles and secret passageways. Idyllic waterfalls cascade amidst the tropical meadows and the coconut palms of West Side Island rise amidst natural gardens of red and pink flowers. Wooden bridges and ring-filled Mobius strips are the only signs of artificial intrusion, aside from Dr. Robotnik's retracting spike beds and Badniks.

The first boss in the game is Dr. Robotnik in a drill car, which he docks the helicopter-bladed Eggman Mobile to. This is not very challenging as it is easy to dodge his attacks and jump on him. After the seventh hit, Robotnik will fire his drill like a missile; jump over the projectile to deliver the final hit.

Emerald Hill also appears as a racecourse in Sonic Drift 2 for the Sega Game Gear. This Zone (as "Emerald Hill 1") is the very first race in the game, before Hill Top 1 in the Purple Grand Prix; the racers re-enter the region during the White Grand Prix, where "Emerald Hill 2" is the sixth and final track, coming after Mystic Cave. As with most other racetracks in the second Chaos Grand Prix, the player has to complete three laps of the track to proceed, and the fastest racer gets a Chaos Emerald.

In Sonic Jam (Game.com), Emerald Hill Zone is where Sonic the Hedgehog 2 takes place in.

In the Sonic the Hedgehog manga published by Shogakukan, Emerald Hill was a location that Sonic, Tails and Charmy once traveled through to save Amy from Dr. Eggman. 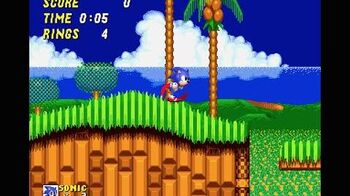 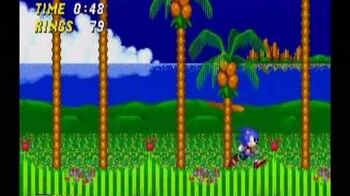