View source
watch 02:58
No Man's Sky Update - The Loop
Do you like this video?
Play Sound
Main Page Gallery

Emerald Coast, from the Nintendo 3DS version of Sonic Generations.

A beautiful coast with blue skies and an orca. Go through the little islands and boost over the sea!

Emerald Coast (エメラルドコースト, Emerarudokōsuto?) is the fourth Stage in the Nintendo 3DS version of Sonic Generations. It originally appeared in Sonic Adventure.

A past version of Emerald Coast, this location got transported to White Space as a side-effect of the Time Eater's time-traveling, where it was drained of color and life.

Emerald Coast was the fourth area Modern and Classic Sonic paid a visit to after ending up in White Space. By speeding through Emerald Coast, the Sonics were able to fix space, thereby restoring Emerald Coast from its lifeless state. When the Time Eater later got destroyed, Emerald Coast was seemingly returned to its rightful place in the timeline.

Emerald Coast Act 1's overall level layout is based on the first half of the original Action Stage. When the Act begins, the player will start out next to the beach resort in Station Square. From there, the player has to proceed across the beach, then scale some rocky structures and wooden bridges. Here, the player can use the Homing Attack, which Classic Sonic learned from Modern Sonic before beginning this Act, to skip across Kikis and reach higher platforms. After that, the player must cross some more wooden bridges while being chased by an orca. Noticeably, these bridges will be full of Wooden Containers and gaps. After that, the player will arrive on dry land again, and eventually arrive at a bridge that leads past a lighthouse.

After crossing the bridge, the player will enter a section in a rocky area where they will run along the side of the wall in order to avoid falling into the sea. On the other side of this section, the player will arrive at an area with red and blue platforms that constantly extend and retract, Jump Panels and upward-going air currents in order to avoid falling into the water. Alternatively, the player can take the lower route which consists of shallow water pools that contains Sweepers. Eventually, the player will arrive at another Jump Panel that will take them into a cavern where they must use air currents to avoid spikes on the walls and the sea bellow. After that, it is straight forward to the Goal Plate, with the Act ending in a way much like the one in the original Emerald Coast, with Classic Sonic being launched through a loop and passing the goal on the beach.

Emerald Coast Act 2's overall level layout is based on the second half of the original Action Stage. When the Act begins, the player will start out on a bridge, with Modern Sonic running towards some rock formations. After that, the player will proceed down routes in a 2.5D perspective that lead across various docks and rocky structures. Along the way, the player can also utilize Rainbow Rings, Dash Ring and upward-going wind currents to take shortcuts. The Act also features some fast-paced platforms where the player has to use the Boost in order to reach higher ground levels. The Act also features ramps and blue dolphins that can help Modern Sonic cross water sections by letting him skip across them with the Homing Attack.

At the end of this Act, Modern Sonic will enter a bridge section where an orca will start chasing him for a short while before a Spring sends Modern Sonic flying into the air. While in the air, the player has to complete a Real-Time Interaction by pressing

three times in order to keep the orca from eating Modern Sonic. Immediately after, the player will arrive at the Goal Ring. 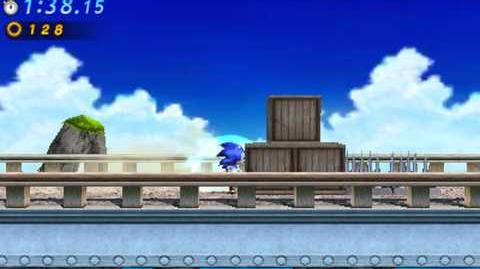 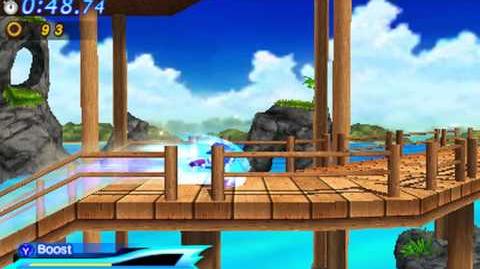