An archipelago of tropical islands near Station Square.

Emerald Coast is an archipelago of small, tropical islands near Station Square in a clean, light blue sky with various clouds. At the start of the Action Stage for any character, the stage is set on a small beach in Station Square with some umbrellas and seats, as well as the hotel nearby. As the player advances, they will be on some wooden platforms with a yellow roof and bouncy wires to prevent them from falling off. After this, the playable character will be on the islands, themselves being covered in green grass and with blueish stone as soil. They will also have sand on the borders.

Accordingly, Emerald Coast is the hottest vacation destination on earth.[1]

After seeing his friend Tails crash-land his plane in Emerald Coast, Sonic sets off to rescue him. After finding him, the two go back to the hotel in Station Square.

When Froggy escapes to Emerald Coast, Big follows him to a small island in this area. There, he is able to retrieve him, only for Gamma to take him, causing Big to go after him.

As part of the mission Dr. Robotnik tasked him and his fellow E-100 Series comrades to do to find Froggy, Gamma heads to Emerald Coast and makes his way there. Eventually, he is able to locate Froggy and complete his mission.

As Sonic, Emerald Coast is a fast-paced Action Stage with some platforming and ramps. Gimmicks included in this Action Stage include spiked bars, Jump Panels, and iron balls. Many hidden Item Boxes can be found here, usually at the borders of the islands.

As Big, Emerald Coast is a small area with a gigantic pond of water filled with fish. Unlike most of Big's Action Stages though, Emerald Coast has various hidden paths and secrets to find, though they only feature Rings.

When using Gamma, Emerald Coast becomes a short-paced, short Action Stage. As with other of Gamma's Action Stages, this stage is filled with Badniks, most predominantly Kikis, and Item Boxes. In addition, most of obstacles that were present in Sonic's version of Emerald Coast are removed and replaced with Springs or beach tables and chairs.

Sonic's version of Emerald Coast starts at the beach near the hotel of Station Square. Behind the spot where the playable character respawns are three 10 Ring Item Boxes. After a section with Kikis, the player is required to continue by traversing through across platforms on a smaller island nearby. For the next section, Sonic goes through a loop and is launched by a Jump Panel ramp to the next island, which is a gigantic beach with little vegetation. Hidden on this island is an Extra Life Item Box. The playable character is then launched by another Jump Panel to a wooden platform with an unstable bridge. In this section, Sonic will be carried by various Dash Panels across the bridge as an orca gives chase to him. Next, the player has to use a Jump Panel to go to another island, which has a tall, plateau-like mountain with a white beacon on the left. There are various Ring-related Item Boxes hidden here. By going up with a ramp and some Springs, the player can find an Extra Life Item Box.

After passing the beacon, Sonic will enter the next section, where he is able to run on walls, one on the right side and the next one on the left side. By running through the latter wall in particular, the player can get a High-Speed Shoes Item Box and, if they continue, they can lead Sonic through a cave that will launch him towards another cave on the right with an Extra Life Item Box. If this section is ignored however, the player will have to go through a large, shallow pond of water with a few platforms. Afterwards, Sonic will be taken to the next island, which has a large ramp that goes upwards. Here, the player has to do some platforming and avoid a spiked bar to get to the next section. However, all of this can be skipped with a Spin Dash to the right and a well-timed Spin Jump just after the ramp.

In the next section, Sonic can find an Extra Life Item Box underneath a platform. To advance, the player has to lead Sonic either through Springs or across Jump Panel plates and pass through two spiked bars to be launched to the next island, which is entirely composed of beach. At the end, the player will find Tails or, if they have already replayed this Action Stage, a Capsule.

Big's version of Emerald Coast takes place on the island with the beacon, except that it is impossible for him to go up there due to the lack of Springs. Instead, they have been replaced by a single Extra Life Item Box. To compensate for this however, two smaller islands have been added near the main one. These islands have secret spots where the player can find a few Rings. As part of Big's fishing-based gameplay, the water has also been filled with fish of various types and sizes. Froggy is found near the beacon.

Gamma's version of Emerald Coast starts out just like Sonic's, except that it will have many more Kikis and beach tables, both of which can be destroyed. After proceeding as normal, Gamma will have to go to the left, due to the first loop being blocked by some rocks, where he will have to proceed across some wooden platforms not present in Sonic's version of Emerald Coast. After this, the player will be launched towards the next island by some Springs. By using a Homing Missile Launch in midair during this trip, they can also get a maximum of three Ring-related Item Boxes. The island where Gamma will land on is identical to the one Sonic is launched towards after the first loop, except that it has many more Kikis and lacks the Jump Panel in Sonic's version. This is also the island where the player finds Froggy, who will end this Action Stage upon contact.

In Sonic Riders, a picture of Emerald Coast can be seen on one of the buildings in Metal City. The picture itself is a screenshot of Sonic Adventure having Sonic run away from the orca.

In the Nintendo 3DS version of Sonic Generations, Emerald Coast appears as the fourth Stage, as well as the first Stage in the Dreamcast era. In this game, Emerald Coast features refreshed graphics and two Acts: one for Classic Sonic and one for Modern Sonic.

In the Sonic X anime and its comic series published by Archie Comics, Emerald Coast was a beach located on Earth, near Station Square. However, it was eventually invaded by Dr. Eggman, who decided to build an amusement park to his own image, though his plans were stopped by Sonic and Amy.

In the Sonic the Hedgehog comic series and its spin-offs published by Archie Comics, Emerald Coast is a beach region located near Station Square, with a past virtually identical to its game counterpart's. At one point in the past, Nikki and Dr. Ellidy went to the beach for a vacation. 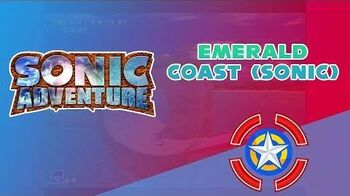