A beach located at the southern end of Emerald Town.

Emerald Beach is located in Emerald Town, and is where Sonic can be fought in the game's Story mode. This is where Sonic met Emerl for the first time. This arena has a good balance between open areas for all-out brawls, and rocky platforms for those who like to use hit-and-run tactics.

At the beginning of the game, Sonic is walking along Emerald Beach, where he spots Emerl, who has been abandoned by Dr. Eggman. Sonic takes Emerl to Tails to find out what it is. Sonic frequently returns to Emerald Beach in order to "play" with Emerl.

At the beginning of the episode, Tails approaches Sonic at the beach and interrupts Sonic's "playtime" with Emerl. Tails takes the robot to the lab in Central City in order to find out more about Emerl. Once the fox has gathered information, he returns to Emerald Beach and reports to Sonic. Rouge also appears, stating that if Emerl gets all seven Chaos Emeralds, they can reset Emerl and erase all of his battle data.

When Amy approaches Sonic, Tails, and Emerl at the beach, Sonic runs off in order to avoid her. Amy asks Tails about Emerl, and the fox replies that it's like Sonic's "baby". Amy misinterprets Tails' remark and thinks Sonic is practicing to propose to her. Tails hurriedly runs away, stating that he has to find Sonic. Rouge seizes her chance, defeats Amy in battle, and hurries away.

Later, when Rouge returns to Emerald Town for a theft, she is confronted by Sonic, Tails and Knuckles. The bat gives up and returns Emerl.

In Amy's episode, Amy goes to Emerald Beach to find Sonic. Sonic runs away from Amy, leaving her with Emerl. Emerl is then attacked by two E-121 Phis. Amy helps Emerl beat the Phis, and collects two Emerald Shards. Amy then leads Emerl off to her house in Central City.

In Shadow's episode, Shadow goes to Emerald Beach to find Emerl, but instead finds Sonic. Sonic then tells Shadow that Emerl is at Tails' Lab, and asks why he wants him. Shadow explains that he wants to make Emerl reach his full potential. Emerl senses Shadow's Chaos Emerald, and wanders over to him. Sonic then tells Emerl to obey Shadow, so he can find out who he truly is. Emerl obliges and then leaves the beach with Shadow.

Later, Emerl returns to Emerald Beach to train with Sonic. Emerl beats Sonic, and the hedgehog says that he was not trying his hardest. He tells Emerl to try fighting someone else first, which prompts the robot to leave. 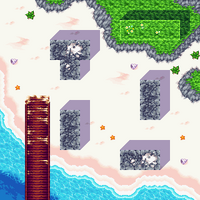