"Emerald Anniversary" is the twenty-third episode of the anime series, Sonic X. It first aired on 7 September 2003 and 6 March 2004 in Japan and the United States respectively.

The episode begins at Area 99 showing a new robot made to combat Dr. Eggman known as Project Beetle. They are hoping that it will be a success. Meanwhile in the city, Topaz and Rouge are near a jewelry store. Rouge is in awe of all the gems that are in there, but Topaz spooks her by telling nearby people to call the police as there is a thief about. Nelson then pulls up in his limo and enters the store. The owners are happy to see him. He tells them that he's looking for an anniversary gift for Lindsey. He then notices a sheet covering something on a stand. The man unveils the sheet, revealing the purple Chaos Emerald. After the store owners make it into a ring and Nelson leaves the store, Rouge and Topaz come up with a plan.

At Chris' house, Nelson calls and asks to have Chris and his friends come to Filmdom City so they can see the surprise he'll spring on Lindsey. Tails inserts three of the four Chaos Emeralds they have acquired so far in a compartment on a side of the X Tornado. Chris asks him how many more they need. Tails says that with their four, and the one Knuckles got from Hawk, they need two more. He then says that they need to take consideration when adding a new Chaos Emerald to their collection. The four Emeralds they have are fine due to the adaptation they have with one another, but when a new Emerald gets added, they could potentially create an electromagnetic reaction, causing major havoc.

Just as the X Tornado is about takes off, Sonic hops onto the rear and joins with his friends. Upon arrival, Chris introduces Nelson to the rest of his friends and Mr. Stewart, to everyone's shock, had followed them there. Sonic then notices the Chaos Emerald he has is reacting to something. Nelson then explains that he intends to disguise himself as Lindsey's co-star in the movie she's working on, and when she approaches him and realizes it's him, he'll reveal the Emerald to her, then Chris, Sonic's friends, and the mansion staff will spring the surprise celebration, leaving Lindsey in awe and gratitude. When Nelson shows them the Emerald in the case, the electromagnetic reaction between Nelson's Emerald and Sonic's Emerald goes off. It shatters light bulbs around the room. Knuckles just happened to be nearby and his Emerald detects the reaction. Even the attention of Dr. Eggman is brought about to Filmdom City.

Back inside, Nelson closes the box that has the Emerald and the reaction is stopped. Tanaka reminds Nelson that the filming is almost ready and that he should get changed. On the set, Knuckles arrives, needing the Chaos Emerald, but Sonic replies that they cannot spoil their wedding anniversary. The take on the set begins rolling, but midway through the scene, as Lindsey is approaching Nelson as he planned so he could present the ring to her, Nelson accidentally trips, causing the Chaos Emerald to fall out of the box and the same electromagnetic reaction happens again, only this time Knuckles' Emerald is also involved, and Lindsey removes Nelson's wig out of suspicion because of it. Dr. Eggman arrives and sees light sprouting upward from the set. Lights and equipment all over are being broken due to the reaction caused by the three Emeralds. Tanaka puts the Emerald back in the box and shuts it and everything stops. Lindsey asks what exactly Nelson is doing, upset at how he ruined the sound stage and possibly the movie she's working on. They begin arguing, with Chuck unable to break it up, when suddenly the Egg Fort II breaks into the set. Eggman, Decoe, and Bocoe run towards the Thorndykes, ordering them to give them the Chaos Emerald.

Eggman chases Sonic across a dinosaur scene, Decoe chases Knuckles across an outer space scene, and Bocoe chases Tails across an ocean scene. While all the confusion is happening, Rouge snatches the Emerald, to Nelson and Lindsey's shock and surprise. Nelson demands it back, but unexpectedly, Eggman then takes it out of her hand. Rouge, Topaz and Eggman begin fighting over the Chaos Emerald. Eggman then lunges his Egg Mobile forward and brings it to a sudden stop, throwing Rouge and Topaz off and on to Mr. Stewart. Sonic and Knuckles then tell Eggman to hand over the Emerald or else. Eggman then dispatches E-74 Weazo to take care of them. Tanaka then tells Weazo to leave the Thorndykes alone and to come fight him. Weazo easily whacks him away. Knuckles wonders what's wrong with Tanaka. Sonic replies, "Too many kung fu movies." As Weazo charges towards the frightened family, it suddenly stops as a result of Knuckles grabbing Weazo's tail, but the robot throws him into some crates. Sonic then knocks the robot over with his Spin Attack, and tells the robot to come after him. Weazo seemingly corners Sonic with its devastating flamethrower weapons. Knuckles follows them and sees them behind a glass wall filled with water. Sonic jumps, allowing Knuckles to break the glass, getting Weazo washed out, disabling its flamethrower and shorting it out, which gives the two of them a chance to finally defeat him.

Eggman then escapes with the Chaos Emerald. The Thorndykes' wedding anniversary didn't go as planned, but it was still, with a few exceptions, a happy one. Rouge, however, is disappointed because Sonic has four Chaos Emeralds, Eggman has one, Knuckles has one, and she and Topaz don't have any. Rouge is now determined to get the Emeralds, regardless of other circumstances. 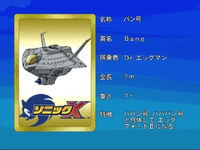 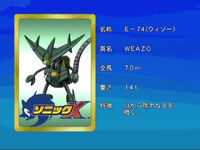