The Eggrobo, from the Wii U version of Sonic Lost World.

And now my ultimate weapon is complete! Finally, with the energy I took from the Extractor, I can rule the world!

The Eggrobo[1][note 1] is a vehicle that appears in the Sonic the Hedgehog series. It is a giant mech powered by the life of Sonic's world that Eggman and the Deadly Six plundered using the Extractor.

Bearing similar appearance to the Death Egg Robot, the Eggrobo is designed as a humanoid mech whose head and torso come together in an indistinguishable egg shape. Its head and torso bear a great resemblance to Eggman's original look, right down to his mustache and attire, with a smaller platform-like torso inside the head for the Egg Mobile to be inserted into as a cockpit. It also has yellow shoulders with green highlights on them, along with red and yellow arms with five fingers and a gray jetpack on the back. The Eggrobo has large armored black feet with what appear to be jets installed in them and has a short green cape made from the life of Sonic's world.

The Eggrobo is a massive powerhouse but is incredibly slow. Its thick chassis makes it highly resilient to attacks and it possesses a jetpack that makes it capable of flight. It can also fire its hands as projectiles, launching a barrage of fireballs with every spin, similar to that of a Gatling gun.

In the Wii U version, PC version and Nintendo 3DS version of Sonic Lost World, the Eggrobo was constructed by Dr. Eggman in the period before the Deadly Six rebelled against him, and was specifically designed to be powered by the energy harvested via the Extractor. Before Eggman could deploy this mech, however, he was driven off from his operations by the Deadly Six when they broke free.

When Sonic and Tails got to the Extractor to shut it down, Eggman ambushed them in the Eggrobo. After having explained how he survived, Eggman revealed his plans to conquer whatever that was left of the world from the Extractor's effects with the same energies it had harvested. However, Sonic did not intend to let Eggman go through with his plan and engaged Eggman in the Eggrobo. In the end, the Eggrobo was no match for Sonic, who utterly destroyed it.

Sonic the Hedgehog fighting the Eggrobo, from the Wii U version of Sonic Lost World.

The Eggrobo is the final boss of the Wii U version and PC version of Sonic Lost World. It is fought in Lava Mountain Zone 4 with Sonic the Hedgehog.

The beginning of the battle takes place in a narrow, straightforward platform aisle that Sonic runs on after being fired from a cannon. The Eggrobo adopts three different attacks during this boss fight:

Having dodged the previous three attacks, Sonic is close enough to launch a Homing Attack on the mech's leg. This will lead the Eggrobo's arm to drag along the highway, allowing for another series of Homing Attacks, finally on Eggman's cockpit. Once hit, the Eggrobo will fall on the ground and roll until it manages to pick itself up again. During this time, Sonic has a chance to use the Focused Homing Attack at the Eggrobo while it is rolling to deal additional damage.

It should be noted that Super Sonic cannot be used for this fight through normal means. 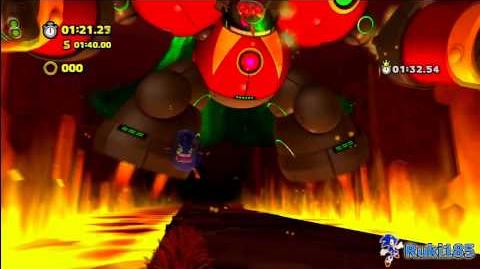 Close-up view of the Eggrobo, from the Nintendo 3DS version of Sonic Lost World.

The Eggrobo is the final boss of the Nintendo 3DS version of Sonic Lost World. It is fought in the Lava Mountain Boss Zone as well as Lava Mountain's Extra Zone, both as Sonic the Hedgehog.

The battle begins with Sonic already running after Eggman's mech, though unlike the Wii U/PC version, he has the ability to control his speed via the R button, rather than automatically running at his top speed. The Eggrobo fight lasts longer in this version and uses different set of attacks from the Wii U/PC version, each based on two Color Powers:

After dodging enough attacks, Sonic will get close enough to launch a Homing Attack, but initiating the attack is a little different in this version, as Sonic must lock-on to the arms, the legs and the chest at the same time to be able to reach Eggman's cockpit. Near the end of the fight, these sections become a little more difficult, as Eggman will fire homing missiles at Sonic. When the Eggrobo tumbles afterwards, Sonic can unleash a Focused Homing Attack to deal more damage. The amount of damage Sonic can deal to the Eggrobo is slightly lowered in Hard Mode as well as in Lava Mountain's Extra Zone, and the amount is even further reduced in Hard Mode's version of the latter.

As the fight draws closer to the end, the mech will drop Wisps which will encase Sonic in a shield made from the stolen life, accompanied by a sound effect from the Genesis games. Eventually, Sonic will launch a final attack on the Eggrobo, and the player is prompted to mash

as fast as they can to successfully destroy the mech and end the fight. Unlike the Wii U/PC version, there are no Red Star Rings to collect, and Super Sonic can be used in this fight, although he will de-transform for the final attack. 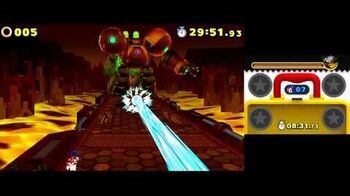 In the Sonic the Hedgehog comic series and its spin-offs published by IDW Publishing, the Eggrobo is a mech that was once used by Dr. Eggman. Its past is mostly identical to its video game counterpart's, up until after the events of Sonic Forces. 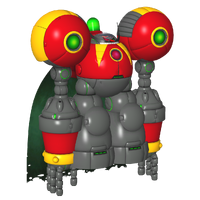