The Eggmobile, from Sonic the Hedgehog Classic Style Guide.

The Eggmobile[1] is an object that appears in the Sonic the Hedgehog series. It is an alternate version of the Egg Mobile from another dimension set in the recent past. Like its counterpart, It is a one-man, multi-purpose hovercraft created and piloted by Dr. Eggman.

Generally speaking, the Eggmobile is a small floating craft with a seat for one person, a very distinctive egg shape and an open cockpit. It possesses a black lower hemisphere with gray metal casing around the upper half, a large yellow headlight on the front with a recess in the aforementioned gray casing surrounding it, smaller yellow lights on the sides of the headlight, and rectangular intakes on the sides. Above the intakes are also arrow-shaped yellow and black hazard stribes, and on the sides of the intakes are small wing attachments. The Eggmobile also has a windshield extending slightly down the front, a black control panel, a blue driving seat, and a motor engine with yellow metal shields on the rear.

In addition of serving as a means of transport, the Eggmobile has the ability to attach itself to other mechs. becoming a cockpit for these machines from where the user controls them. Plus, if these machines are defeated, the Eggmobile then serves as an escape pod, allowing the pilot to eject mostly unharmed from the larger machine.

In Sonic Mania, and its expansion Sonic Mania Plus, the Eggmobile appears during a few boss battles in Mania Mode. These battles are as listed below:

After being defeated in Studiopolis Zone Act 2, Dr. Eggman escapes in the Eggmobile. The Eggmobile is briefly seen prior the final phase on Metal Sonic battle when Eggman tosses the Phantom Ruby to Metal Sonic, as it then proceeds to transform into Giga Metal. Later on, the Eggmobile is seen being parked on the edge of a cliff with the Egg Vortex around it at the beginning of the boss battle in Hydrocity Zone Act 1. As a unique take on this boss battle, the player can hop into the Eggmobile and move it around above the water pool that Eggman is swimming around in and setting round bombs for the player. Much like the boss battle in Sonic the Hedgehog 3 & Knuckles, the player can drop pipe bombs to destroy the round bombs in the water pool or create subsiding water vortexes to catch and damage Eggman. Also, in the final battle with the Phantom King in Egg Reverie Zone, Eggman used a damaged Eggmobile to make the Klepto Mobile.

In Sonic Mania Plus' Encore Mode, the Eggmobile appears during the same boss battles as in Mania Mode where it serves the same roles. However, the Klepto Mobile does not appear, as Egg Reverie Zone is not included in that mode.

In Sonic Colors: Ultimate, the Eggmobile and Dr. Eggman make a cameo as the "Classic Eggman" profile picture that can be bought in the Customize menu for seven Park Tokens. The picture is taken from the Sonic the Hedgehog Classic Style Guide.

In Sonic Mania Adventures, the Eggmobile was used by Eggman to tow a Capsule filled with Animals across Angel Island.[2]

In the Sonic the Hedgehog comic series and its spin-offs published by IDW Publishing, the Egg Mobile is the signature transportation vehicle of Classic Eggman, and the version of the Egg Mobile from another dimension set in the recent past.

The Art of Sonic Mania 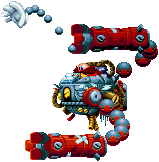