An Egg Mobile equipped with a saw blade. The player has to hit five times to defeat it.

Such power exceeds even MY expectations. Hah! My own genius scares me sometimes.

Eggman is the first part of the third boss in Sonic Forces. He is fought in Green Hill's "VS. Eggman" stage, which is the eleventh stage in Sonic Forces, and the third stage in the game to be played as Classic Sonic.

The battle takes place in a familiar wide arena with two platforms on each side. Here, Eggman flies left and right with his Egg Mobile while swinging a saw blade hanging from the Egg Mobile by a chain back and forth. The player can easily hit the Egg Mobile from one of two platforms while watching out for the swinging saw blade, which will damage the player should they touch it.

After five hits, Eggman will summon the Egg Dragoon. 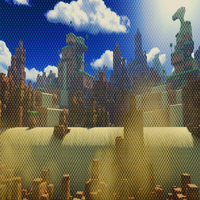