Deep in the mystic jungle lurks one of Eggman's many bases. Shadow is en route to raid and destroy it. And Eggman's army is in full force to greet him and take him down, by any means necessary.

Eggman's Facility appears in a flashback set a couple of months before the events of Episode Shadow. In it, Infinite explains his first encounter with Shadow the Hedgehog when the latter came to Eggman's Facility to destroy Eggman's base.

Similar to other areas within the Mystic Jungle, Eggman's Facility is set in a brown mountainous region at night during a full moon. It should be noted that the mountains in this stage are rather blocky, much like in Green Hill, and there are evidence of a recent rainfall. Between the mountains on the bottom are a massive lake and numerous rivers. Also, growing on the region's dry land and mountains are lush tropical trees with round tree crowns, grass and fern-like bushes.

Also found in Eggman's Facility are ancient ruins, such as roads, pillars, road gates, crumbling walls, temples and still-burning torches, most of which are overgrown with plants. All of these ruins have yellow runes/murals that glow.

As a result of Dr. Eggman's actions, the majority of the ruins have been converted into casinos. Numerous neon signs in different shapes and colors have been added to the ruins, and ancient temples have been converted into neon palaces. Ancient pillars have similarly been turned into palm-shaped street lights. Also, many of the trees in Eggman's Facility have been set ablaze, turning huge sections of the forest into burning infernos. The stage also has a myriad of twisting half pipes made from tree trunks with water flowing through them and vines surrounding them, forming a warped network of waterslides.

After Shadow the Hedgehog encounters Infinite at last within the confines of an Eggman base, the mysterious being begins to tell his story of his last encounter with Shadow several months ago...

Whilst en-route to raid and destroy one of Dr. Eggman's many facilities, Shadow encountered Squad Jackal, a group of mercenaries hired by Eggman to guard his base. The group, however, was no challenge for the Ultimate Lifeform as all but their captain (who was elsewhere) were wiped out. Surprised by this, Eggman ordered all of his available troops to take out Shadow "by any means necessary", with increased desperation to protect the base as Shadow got closer to it, even though the facility had already finished its analysis of the "stone" the day prior.

Upon finally reaching the base, Shadow was greeted by the captain of Squad Jackal, the soon-to-be Infinite, a.k.a. the "ultimate mercenary". The jackal lunged towards Shadow to avenge his squad, but due to his skill with Chaos Control, Shadow effortlessly dodged the mercenary and struck back with a powerful counterattack. Shadow then left the beaten and humiliated mercenary, warning him to never show his "pathetic face" around him ever again. Physically and psychologically wounded, the mercenary questioned his superiority, and all he could do was scream helplessly into the night that he was "not weak".

Back in the present, Infinite recounts that since that day, he had discarded his old identity—going as far as to wear a mask to abandon his old face—and obtained the power to "make all yield" to him. Now, with limitless power at his command, Infinite is ready to crush Shadow, which he promptly attempts to so by trapping Shadow in an illusion.

Much like the stage it was based on, Eggman's Facility predominantly features water slide sections. Whilst on the water slides, Shadow moves forward automatically. The player will also have limited movement abilities and must avoid falling off the edges of the slides and into bottomless pits. While sliding, the player must also be wary of outdated Moto Bugs, who drift down the slides alongside the player; if Shadow collides with a Moto Bug, he will get knocked around, making navigation on the slides more difficult. Also, while colliding with a Moto Bug will destroy it, a new one will soon after arrive to take the destroyed one's place. Different from original stage however, is the inclusion of golden Moto Bugs, who need to be struck three times to be destroyed; upon these Moto Bugs' destruction they will leave behind a Super Ring or a Red Star Ring.

In terms of obstacles in Eggman's Facility, the player will primarily encounter iron balls. These obstacles appear either along the water slides (often alongside the Moto Bugs) or as objects attached to the ends of revolving bars that obscure the player's path. In some places, there are also thorn bushes that will damage Shadow in case he touches them. The stage also includes balloons for the player to bounce on.

Launching from more Springs, the player will be led through Dash Rings and land on a second water slide segment. At the start of this section, there will be several iron balls rolling down the slide which the player must avoid. After that, the water slide splits into three paths for the player to take. Like before, Moto Bugs will appear during this section.

Once again, at the end of this section, the player will be launched from Springs towards a group of Nebulas which the player must use to cross a gap. This time, the section also includes balloons that they player can use to reach some Dash Rings, which lead towards the goal. 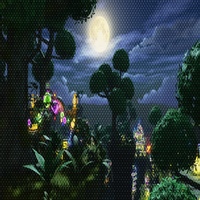