Concept artwork of the Egg X, from Sonic Advance.

Egg X is an upgraded Egg Mobile with a giant arm. The body is mostly red, yellow, and blue and the arm is gray. In between the yellow and red parts of its body is gray and black. When it is ready for attack it will lower its guard, revealing Dr. Eggman.

As the final boss, it's much harder. The cockpit is shielded by a rotating red ring which has three weapons: an arm, a ball shooter a laser beam. At times, the red layer will stop rotating and lower, exposing Eggman's cockpit and activate the weapon it stopped on. When Eggman shoots its laser, the player should duck to avoid damage. When Eggman fires balls, he may fire at two different angles so the player will need to jump over as they approach him/her. When firing its arm, Eggman will take some time to aim at the player before firing it. The player will need to jump over to avoid this because if the arm grabs the player, he/she will lose all of their rings and be hurled to the other side while Eggman moves to the other side.

Also, Eggman may charge at the player, which is also a chance to hit the cockpit. After a good number of hits, the Egg X will explode and the player will run away with the destruction of the X-Zone right behind them. The player will then fall but will caught on the wing of the Tornado with Sonic piloting the plane. (If the player is playing as Sonic, the pilot will be Tails.) If the player has all the Chaos Emeralds, completes the game with all four characters and plays through X-Zone as Sonic, Sonic will see Eggman escaping to the Moon (though the base isn't seen exploding). He'll transform into Super Sonic and give chase, thus starting The Moon Zone. 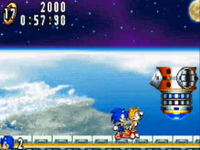