Egg Walkers are lumbering, bipedal mechs without the ﬂying mode of the Egg Cannons. Egg Walkers are equipped with twin Laser Cannons that fire two energy beams in a straight line. There is no deﬂecting this attack. Egg Walkers have weak legs, so a sweeping attack to the feet is enough to knock the robot off balance. When the robot is on one knee, attack the central unit until the mech is destroyed.

Egg Walkers are combat automatons constructed by Dr. Eggman, which were deployed throughout Soleanna during the events of Sonic the Hedgehog (2006).

Egg Walkers have a silver paint job with red paint on their legs, above their central unit, and on their twin Laser Cannons.

The Egg Walkers are enhanced versions of the Egg Cannons, although they lack the machine gun and missiles. They also lack a flying mode, which makes them less vulnerable than their predecessor.

In gameplay, the Egg Walkers can sense the player's presence from several meters away, upon where they will attack anteriority targets using two long-range, straight-lined volcanic lasers. If the player is close to an Egg Walker, it will either shoot a single laser from its laser cannon or fire six lasers from its cockpit at the playable character. Similar to the Egg Cannons, the Egg Walkers move very slowly and cannot walk properly. Additionally, an Egg Walker cannot be paralyzed unless the player hits its cockpit directly with a blue crate, Psycho Shock or a Chaos Spear. Additionally, attacking a single leg will only immobilize it temporarily. Attacking both legs, however, will immobilize it completely.

Egg Walkers are an advanced model of the Egg Cannons, and though they lack flight capabilities, they have stronger armor. The Egg Walkers are equipped with twin laser cannons on the sides, six lasers that can focus on a single target, and a laser cannon that fires one accurate laser. 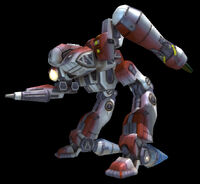 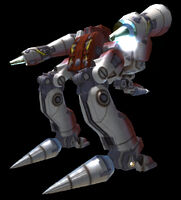