The Egg Walker, from Sonic Forces.

The Egg Walker[note 1][1] (エッグウォーカー[2], Eggu Wōkā?) is an enemy that appears in Sonic Forces. It is a mass-produced, ostrich-based Badnik model created by Dr. Eggman.

Shaped like ostriches, the Egg Walkers have lavender bodies with black pelvises and long black legs. Their legs in particular have red lights where they bend, and their feet each possess two purple toes. In place of wings, they have two-barreled missile launchers. Finally, they have long necks (with a red-lit joint) and flat black heads that only have red eye lenses and a purple fin on top as facial features.

The Egg Walkers can be found stages such as Luminous Forest, Park Avenue, Metropolitan Highway, Null Space and Mortar Canyon.

Having no forms of defense, the Egg Walkers are easily destroyed with any form of attack.

The Egg Walkers are very fast runners, although they cannot match up speedsters like Sonic or Shadow. They also come equipped with missile launchers that let them fire explosive missiles.

In the Sonic the Hedgehog comic series and its spin-offs published by IDW Publishing, the Egg Walkers are Badniks created by Dr. Eggman. Their past is virtually identical to their game counterparts' up until after Sonic Forces. In this media, they have been redesigned to look like a combination of an ostrich and a fowl. 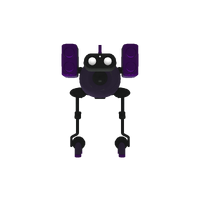